Iceland has a reputation as a landscape rife with natural wonders and diversity of rock and ice-covered landscapes. There’s also a rich human history across the island, highlighted by Viking ruins and burial mounds that tell the story of the people who established the richest part of Icelandic history. There are even ruins of a Viking “estate” in the Westfjords of Iceland. Many Icelanders, quite naturally, consider themselves to be descendants of Vikings.

You might ask yourself, what are some of the best reasons why a visit to Iceland should be at the top of your travel bucket list? Let’s delve into these wonders of Iceland. 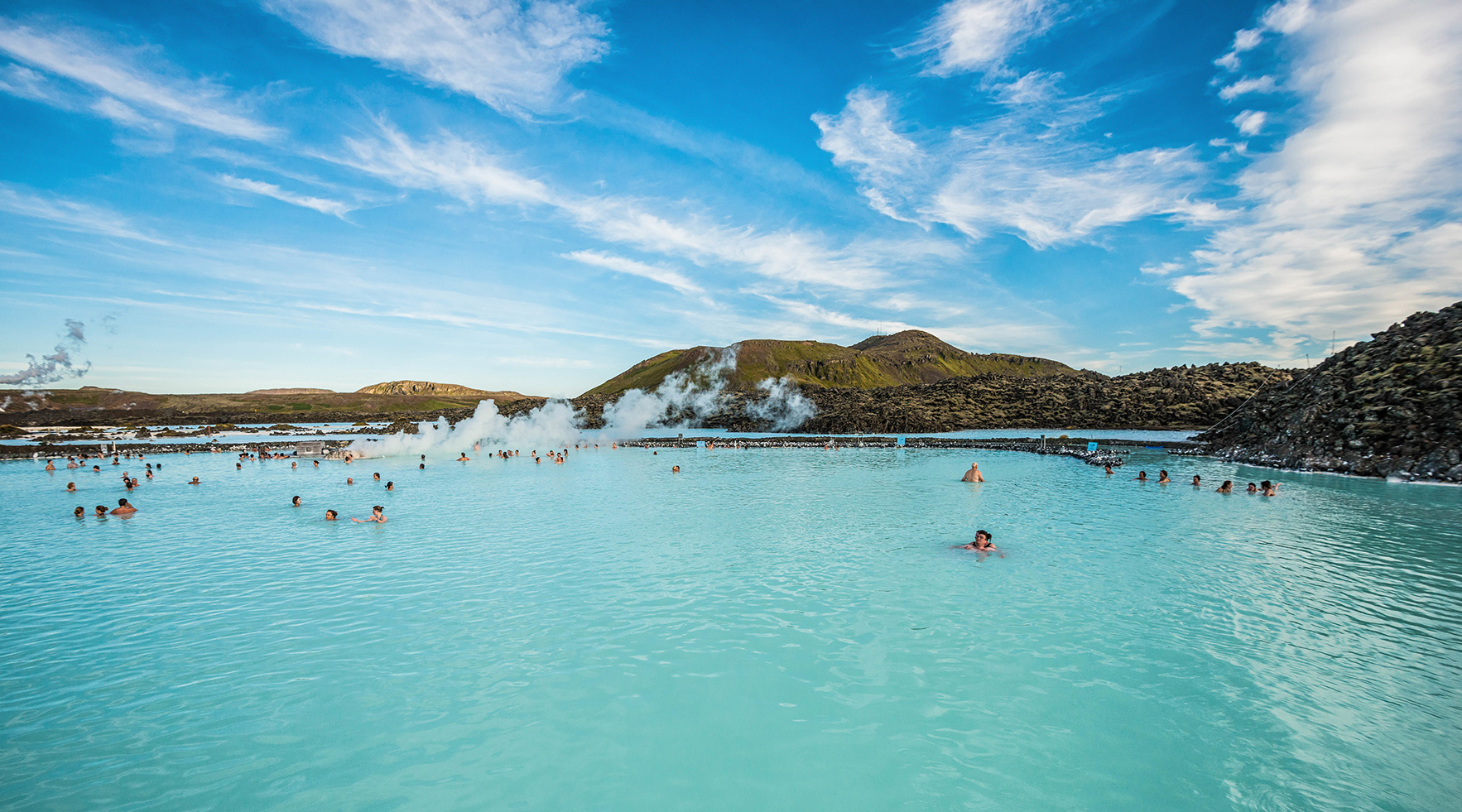 The Icelandic capital, Reykjavik, was first settled by the Viking explorer Ingólfr Arnarson and the city has a rich history of Viking culture and landmarks. One of the most attractive tributes is a monument known as the Sun Voyager Sculpture situated on the edge of the sea. It resembles a boat used by Viking explorers at the height of the Middle Ages, allowing people to get a sense of what it was like for adventurers to explore in those days.

Unlike many of Iceland’s landmarks, the Imagine Peace Tower was not built in tribute to Viking history. Instead, the tower was commissioned by Yoko Ono in honor of her late husband John Lennon of The Beatles. It’s located on Videy Island, and it offers overhead views of some of the best scenery to witness in Iceland.

For travelers who appreciate a great brewery tour, Iceland has some of the greatest pubs you can come across. Gray Line Iceland is one of the best local travel companies that organize special “Taste The Saga” brewery tours that include samples of Brennivin, the signature brew of Icelandic culture. You’ll also learn about the history of the brewery business across Iceland.

Another point of interest in the Icelandic capital is the Perlan Museum, which is the natural history museum of Iceland. Within the Perlan Museum, visitors will find a real indoor ice cave, a modern nature exhibition, a planetarium, a 360-degree viewing platform, and many other exhibitions that bring to life the natural history of this northern island. 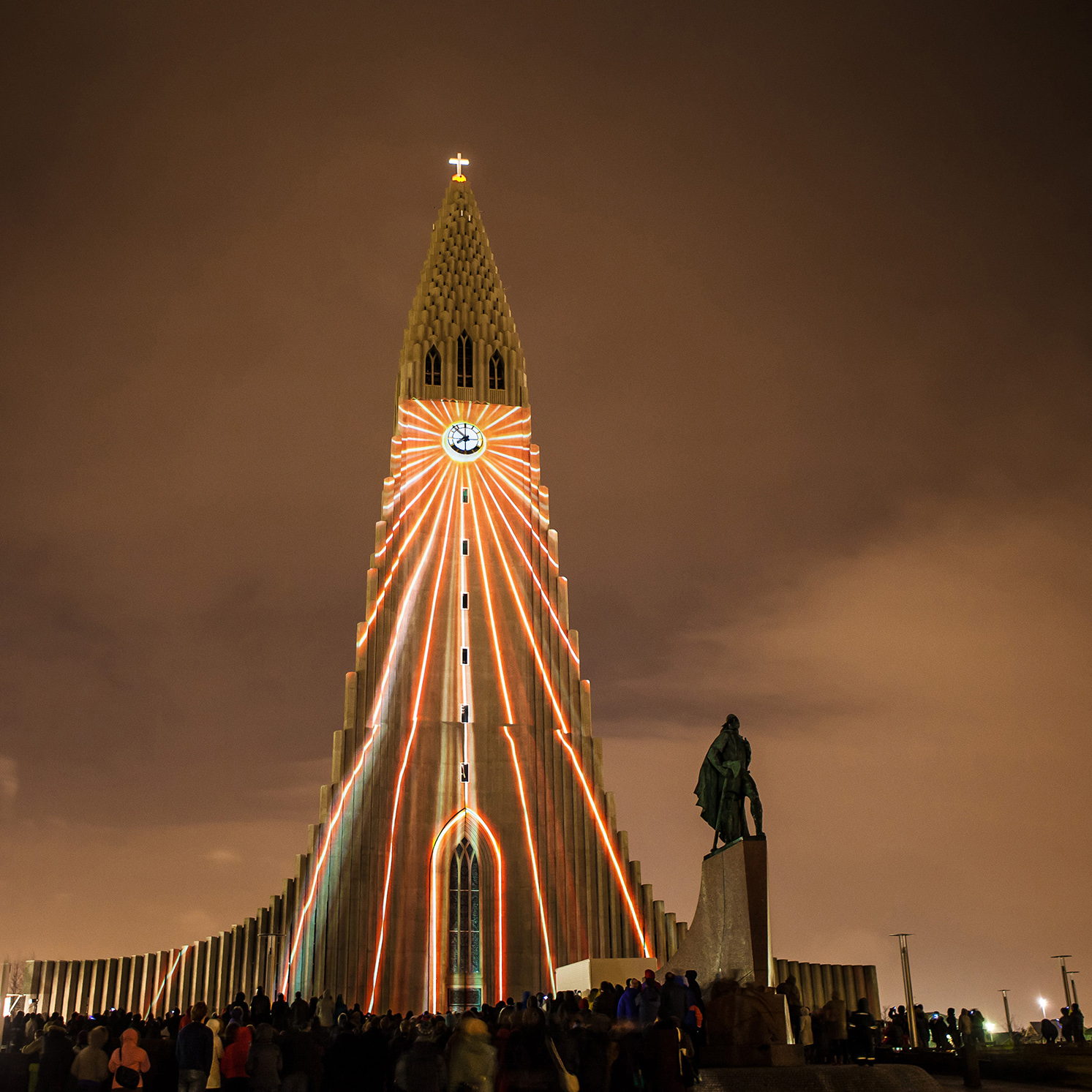 The Hallgrimskirkja Church, which towers over the capital of Reykjavik, is among the many architectural structures
to visit in Iceland . Photo: AdobeStock

The Blue Lagoon, located near the lava fields of Reykjanes Peninsula, is one of the most popular attractions in all of Iceland. Their proximity to the lava fields makes the waters of the lagoon well above average temperatures for Iceland. In many ways, it functions as a natural hot spring that appeals to anyone who appreciates a geothermal dip in a cold climate! The Blue Lagoon, which is a spa open to everyone, is surrounded by black lava and gray moss that’s a stark contrast to the luxuriating experience of floating about outdoors in waters that are consistently 102 F (39 Celsius) all year round. It’s the perfect outdoor bathing experience upon arrival or just as you’re preparing to leave home as it’s relatively close to the international airport.

One of the attractive reasons why you should visit Iceland is that it’s a prime location to witness the Aurora Borealis. But if it’s not in season, or the weather conditions make it impossible to view the natural phenomenon, you can visit Aurora Reykjavik for a recreated version of the northern lights. Learn all about the history of how they appear in the sky with some stunning photos and compositions of the event itself.

History buffs will greatly appreciate the Open Air Folk Museum as a way to learn all about both the urban and rural trials and tribulations of life in Iceland. You can arrange to go on guided tours throughout the area by visiting farmlands, exhibitions, cultural events, and the museum’s special cafe to get a real taste of the Icelandic experience.

Visitors with a keen interest in the natural history of Iceland’s volcanoes and seismic activities will appreciate a trip to Volcano House. Here, you’ll find information on the many volcanoes throughout Iceland, including the history of past eruptions, and their influence on hot springs across the island – including Blue Lagoon.

If you’re interested in becoming acquainted with the locals, the Tin Can Factory is one of the best places to pal around with locals. You’ll get a chance to learn more about the language, history, and customs of Iceland as you sample local foods and drinks that help influence life on the island. The Tin Can Factory offers visitors a truly immersive experience during which they learn about Icelandic culture, participate in some hands-on activities, and sit down – with locals – to an authentic Icelandic meal. You can sign up for a language, cooking, or other cultural class.

Of course, a trip to Iceland is not complete without visiting some of the stunning glaciers situated across much of the island. You can arrange trips to see glaciers like Vatnajökull, Langjökull, or Hofsjökull, and bring your camera to snap photos of the greatest natural wonders that Iceland has to offer.

If whales and whale watching are near the top of your itinerary list for a trip to Iceland, what is the best time of year to undertake that activity? Weather largely dictates when whale pods are likely to appear near the island’s coastline so you’ll want to time your visit around what works best for those whale families.

In most cases, the summer months between June, July, and August are the best time to visit Iceland for whale watching. This is when the water is at its warmest and most calm, allowing whales to swim closer to the island’s shoreline without much hassle. This is the time of year when you can view these mammals in all of their glory. However, if you’re keen to experience such natural wonders as the Northern Lights, then September would be preferable.

Where to See Arctic Foxes in Iceland

Whales may not be the only wildlife you wish to see on your visit. While there are no large mammals in Iceland, you can see Arctic foxes. The best place to see Arctic Foxes in Iceland is the Westfjords in northwestern Iceland. This is also an area home to a large collection of bird cliffs that are difficult for humans to navigate, making them an ideal location for Arctic Fox that prefer their privacy. A trained adventure guide can help you reach the ideal destination in Westfjords to capture photos of these beautiful animals.

How to get to Iceland

There are two amazing adventures that include stops in Iceland to consider for your next polar experience. One of those journeys is the Under the Northern Lights: Exploring Iceland and East Greenland journey that spans 14 days stretching from the Icelandic capital to the King Oscar Fjord in Eastern Greenland. Depending on the weather conditions at the time, this could be your ideal journey to see the Aurora Borealis unencumbered by artificial lights since most of the locations you’ll visit are uninhabited by humans.

The second journey is one that takes you across three separate islands in the appropriately named Three Arctic Islands: Iceland, Greenland, and Spitsbergen voyage. Named one of National Geographic Traveler’s 50 Tours of a Lifetime, this 15-day journey will take you across much of the North Atlantic Ocean as you travel to each of these three islands. While there, you’ll experience local cultures and cuisines while adventure guides keep your eyes open for rarely seen wildlife on each of the three islands.

What are some of the best reasons to visit Iceland in summer? The combination of greenery and stunning glac...

What should you know before embarking on a bird-watching Patagonian adventure? Here’s a detailed guide to p...