August 5, 2021
Antarctica is the southernmost continent on Earth, and it’s often perceived as an entirely different world. It’s a region rich in beautiful landscapes, expansive glaciers, majestic icebergs, and snow-capped mountain peaks.
Antarctica is largely thought of as one large landmass, but it actually incorporates a number of islands situated within the Southern Ocean. The most beautiful islands of sub-Antarctica include the Shetland Islands, and the sub-Antarctic South Georgia and Falkland Islands. Cape Horn in the Tierra del Fuego archipelago, at the cusp of the Southern, Atlantic and Pacific Oceans, is often included in this mix of remote islands.
No one actually lives full-time on the Antarctica Peninsula. There’s no permanent population in the Antarctic—since no one country owns Antarctica. So it’s surprising to many that Antarctica actually has its own collectible Antarctica currency for travellers eager to take home mementos from their time exploring the southern landmass.

What currency does Antarctica use? 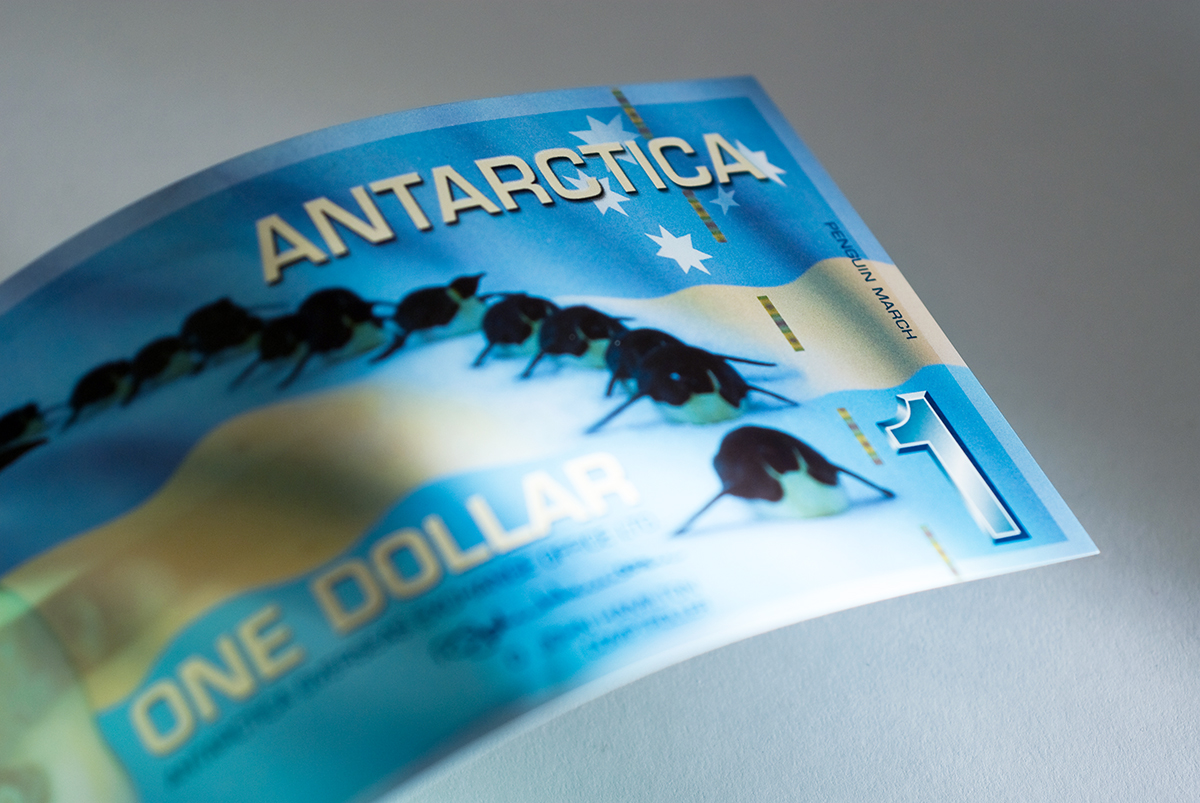 While not considered legal tender, there is a collectible dollar available to visitors in the 7th Continent. It's called the
Antarctic or Antarctica dollar. Photo: AdobeStock

There actually is an Antarctic dollar, or Antarctican dollar, that’s used throughout the Federated States of Antarctica. It’s also known as an Emp (or buck) in honour of the Emperor Penguins that call Antarctica home.
However, it’s not what you’d call a ‘real’ currency. In other words, it’s not considered legal tender. They’re treated as collectibles for visitors to take home as memories of their adventures across the land.
Despite its remote location, people may still be in need of cash while exploring Antarctica. That’s why a convenient ATM, powered by Wells Fargo, is situated at McMurdo Station, a research station on the shores of Ross Island.

Since it’s such a remote landmass, it’s not a simple matter of jumping onto any plane to visit Antarctica. Thankfully, experienced polar operators like Quark Expeditions have the experience, polar vessels and trained expedition team to ensure you arrive safely in Antarctica.
You can board a chartered plane for such itineraries as the Antarctic Express: Fly The Drake, for which you can fly across the 800-kilometre Drake Passage and meet up with your polar vessel after landing on King George Island. This 8-day adventure explores the Antarctic Peninsula, and you’ll also visit the South Shetland Islands. You can join jook hiking excursions, go kayaking or select from a robust portfolio of off-ship adventure options available to travelers to Antarctica.
Some travelers will have the opportunity to explore Antarctica on Quark Expeditions’ new ship Ultramarine, which is equipped with two H145 twin-engine helicopters that will take you flightseeing over the continent, and it can also provide other helicopter-supported adventure options that immerse guests in the polar landscape.
Experienced polar operators have the ability to deliver a smooth adventure in the harshest climates on the planet, such as Antarctica. You’ll benefit from traveling with an experienced team who can safely fly you into Antarctica and guide you through your adventure of a lifetime.

How much does it cost to go to Antarctica? 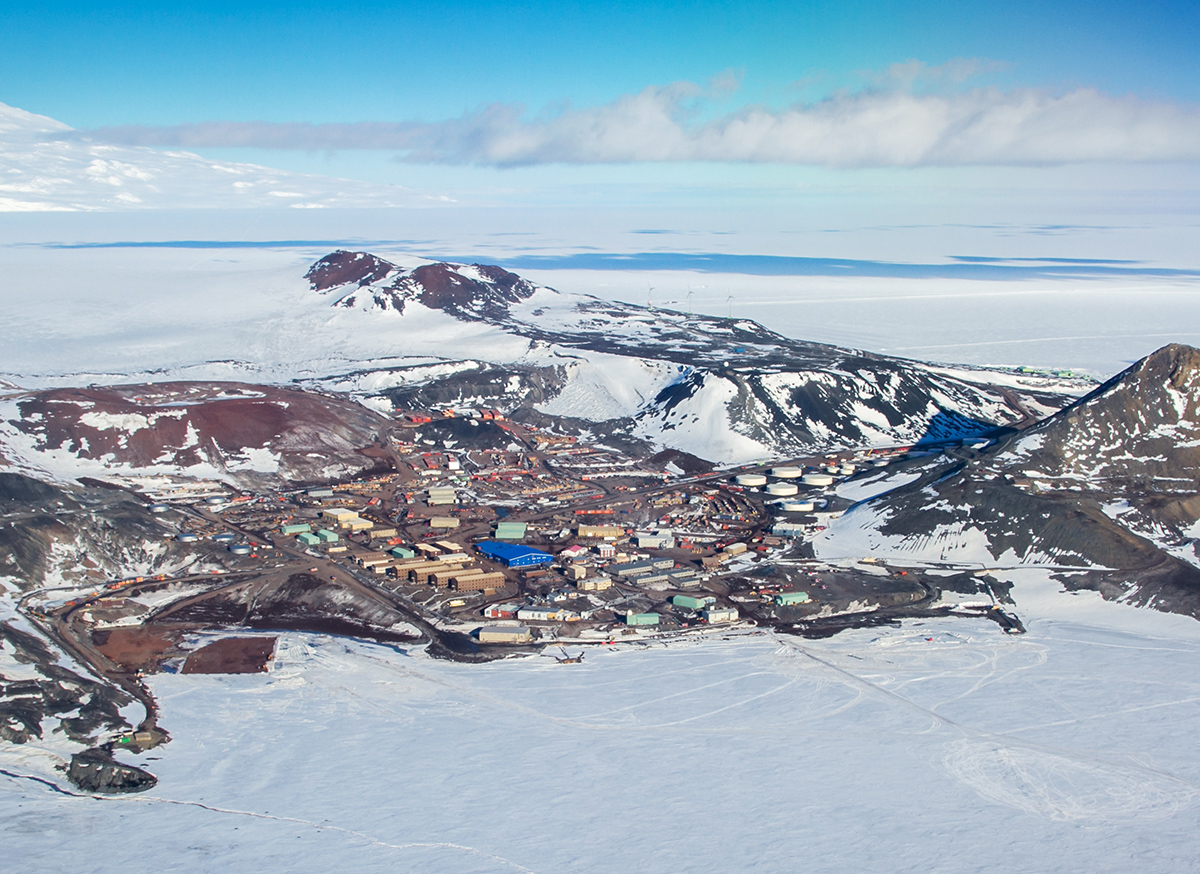 The only ATM in the Antarctic is located at the McMurdo Research Station on Ross Island. Users can
withdraw American dollars. Photo: AdobeStock


Since Antarctica is in such a remote part of the world, you will need to create a budget for such an adventure before you depart on your journey. You’ll need to account for the cost of your flight, your cruise, and any gear you’ll need to bring to make the most of your time on the southern continent.
At Quark Expeditions, the cost to go to Antarctica ranges, based on the type of voyage you wish to experience. Options range from itineraries such as the 10- or 12-day Antarctic Explorer: Discovering the 7th Continent voyage, during which you will ravel the northern cusp of the continent, sailing through the South Shetland Islands and onwards to Anvers Island across the Lemaire Channel.
For the adventurer with more time on their hands, there’s the 23-day Epic Antarctica: Crossing the Circle via Falklands and South Georgia adventure. On this voyage, guests will explore all of the northern Antarctic islands, and eventually cross the Antarctic Circle on the west coast of the mainland.

What to pack for Antarctica

In order to get the most enjoyable out of your Antarctic experience, you’ll need to pack the appropriate gear. Even in the summer months, the temperatures in Antarctica can vary. You need to be prepared for all weather conditions.
Thankfully, there’s a helpful packing checklist you can follow to make sure you bring the right gear. Among the most important items to bring are:
Visit the check list above to determine all accessories and extras that will ensure you’re fully equipped for your polar voyage. 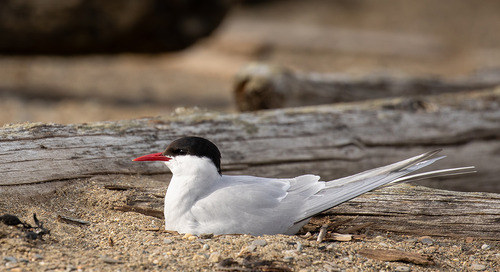 Arctic Terns are fascinating. They sleep and eat while they glide. They have the longest migration route in... 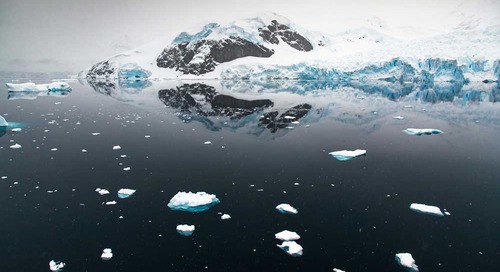 Can you fly to Antarctica? The answer is yes if you travel with experienced polar adventurers. This guide p...