My first “sighting” of The Falkland Islands, the remote archipelago of Islands in the South Atlantic governed by the British, was in the film “Resurrected.” Initially I was intrigued by the history of the Falkland Islands as it unfolded one dramatic movie scene after another—until I saw wildlife and landscape images dancing across the screen and I was smitten. The wildlife shots alone (imagine thousands of albatrosses in one spot) sent me running to Instagram to see more photographs. 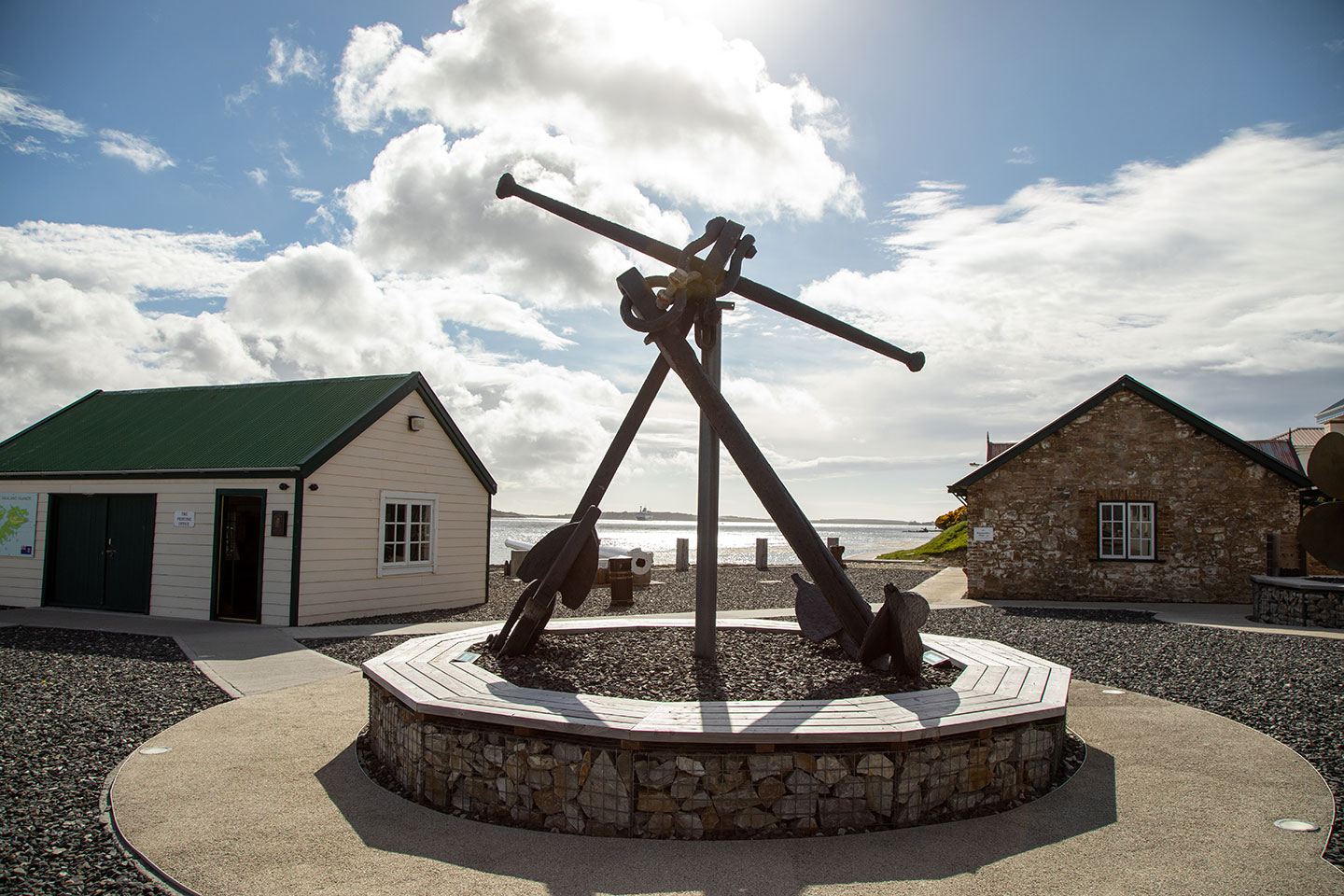 For those not in the know, the Falkland Islands archipelago is also known as Islas Malvinas. Located about 400 km northeast of Tierra del Fuego, the south Atlantic archipelago is the southern-most point of South America. The Falklands are known for wildlife (an abundance of penguins and bird species, as mentioned above) as well as its periodically turbulent history. Hundreds-years-long sovereignty disputes between the United Kingdom and Argentina (hence the English and Spanish names) resulted in the 1982 Falklands War. (If you happen to be a fan of that BAFTA-winning series, “The Crown,” fast-forward to season four for episodes dealing with the Falklands War.)

Many travelers include Falkland Islands on their itinerary when they’re on their way to Antarctica. (The Falklands, as with South Georgia, are sub-Antarctic regions.) Quark Expeditions features the Falklands in numerous polar voyages.

Ice-strengthened polar ships. That’s the short and pithy response to wanderlusters asking how to visit the Falkland Islands. Many (certainly most of the people I know who’ve travelled there) do so while on Antarctic polar voyages led by seasoned polar expedition guides. Quark Expeditions is one such operator. In fact, Quark Expeditions has been taking travelers to the Polar Regions exclusively since 1991.

So, an ice-worthy ship, an experienced team—plus onboard staff that includes polar experts to amplify the experience are crucial if you’re figuring out how to visit the Falkland Islands. Quark Expeditions is known for the calibre of polar historians, biologists, glaciologists, ornithologists, penguinologists and other polar experts they invite onboard to enrich the expedition experience for their guests.

The best time to visit the Falkland Islands is generally the period between October and March. Many seasoned travelers suggest that weather conditions and wildlife viewing opportunities can narrow this timeframe to the November-to-February period.

Not only will visitors encounter warmer weather, but many penguins lay their eggs during this period, and witnessing the hatching of these eggs—and the eventual appearance of baby penguins—is not to be missed.

Two popular voyages that coincide with the best time to visit the Falkland Islands are Falklands, South Georgia, and Antarctica: Explorers and Kings (November/December) and the Epic Antarctica: Crossing the Circle via Falklands and South Georgia (December/January).

First, you’ll want to choose which expedition delivers a Falkland Island experience that fulfills your travel goals. You can start by checking out the list of Quark Expeditions voyages that feature the Falkland Islands in the itinerary, and identify for yourself some excellent Falkland Islands sightseeing opportunities. 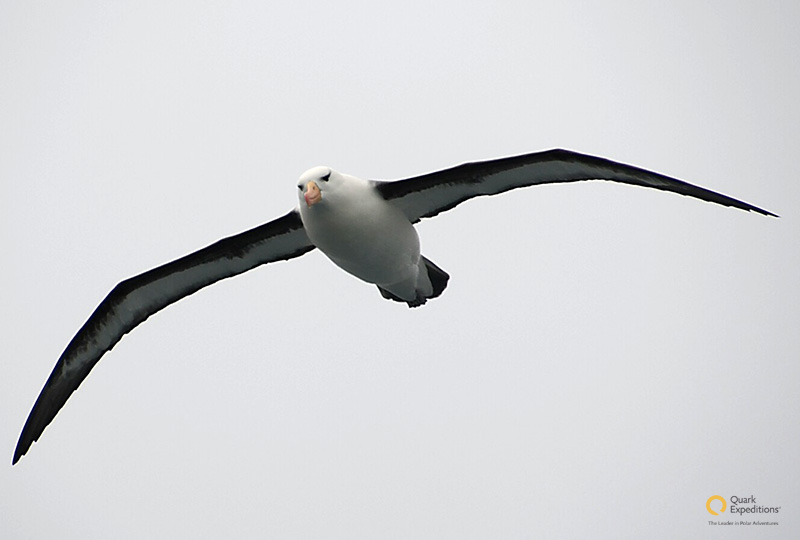 It's reported that approximately two-thirds of the world's albatross population
breed in the Falkland Islands (Islas Malvinas). Photo: Ian Robertson 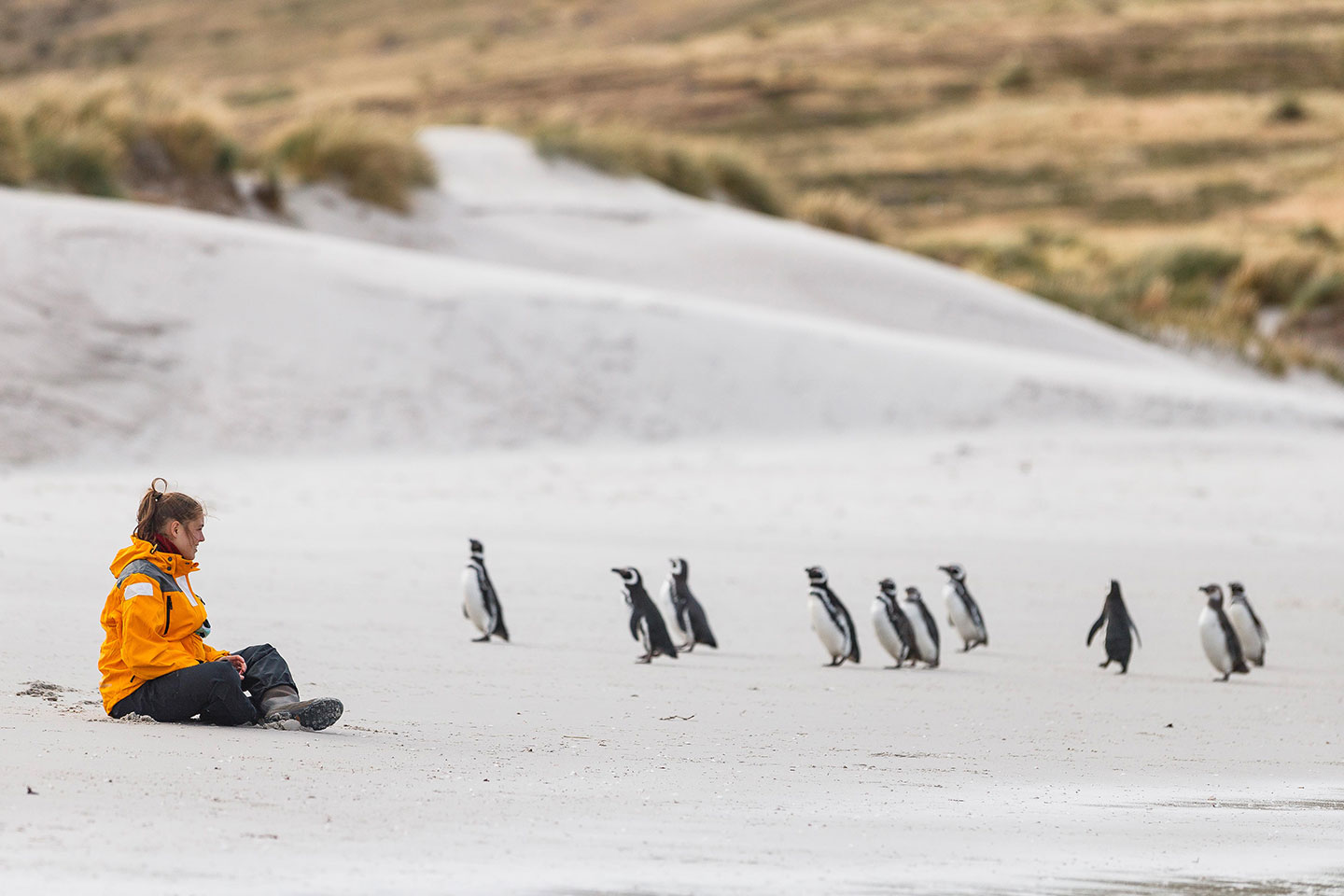 Resident penguins and a Quark Expeditions guest are mutually curious in this photograph taken on the Falkland Islands,
which is home to thousands of penguins of various species. Photo: Nicky Souness

For instance, days 4 and 5 of the Epic Antarctica itinerary  presents plenty of opportunities for Falklands Islands sightseeing: “Upon your arrival in the Falklands (Malvinas), your camera will get its first real workout capturing the abundant wildlife and rugged feel of this sub-Antarctic region. The archipelago contains two main islands, East Falkland and West Falkland, which you will explore during daily Zodiac excursions and landings.”

Start your Falkland Islands sightseeing in Stanley, also known as Port Stanley, which has been described as more British than a British village back in the UK. You’ll have time to visit this unique (and remote) British outpost of 2,100 residents, where can explore, grab a pint at the local pub or visit the cathedral and museum, especially the Historic Dockyard Museum. 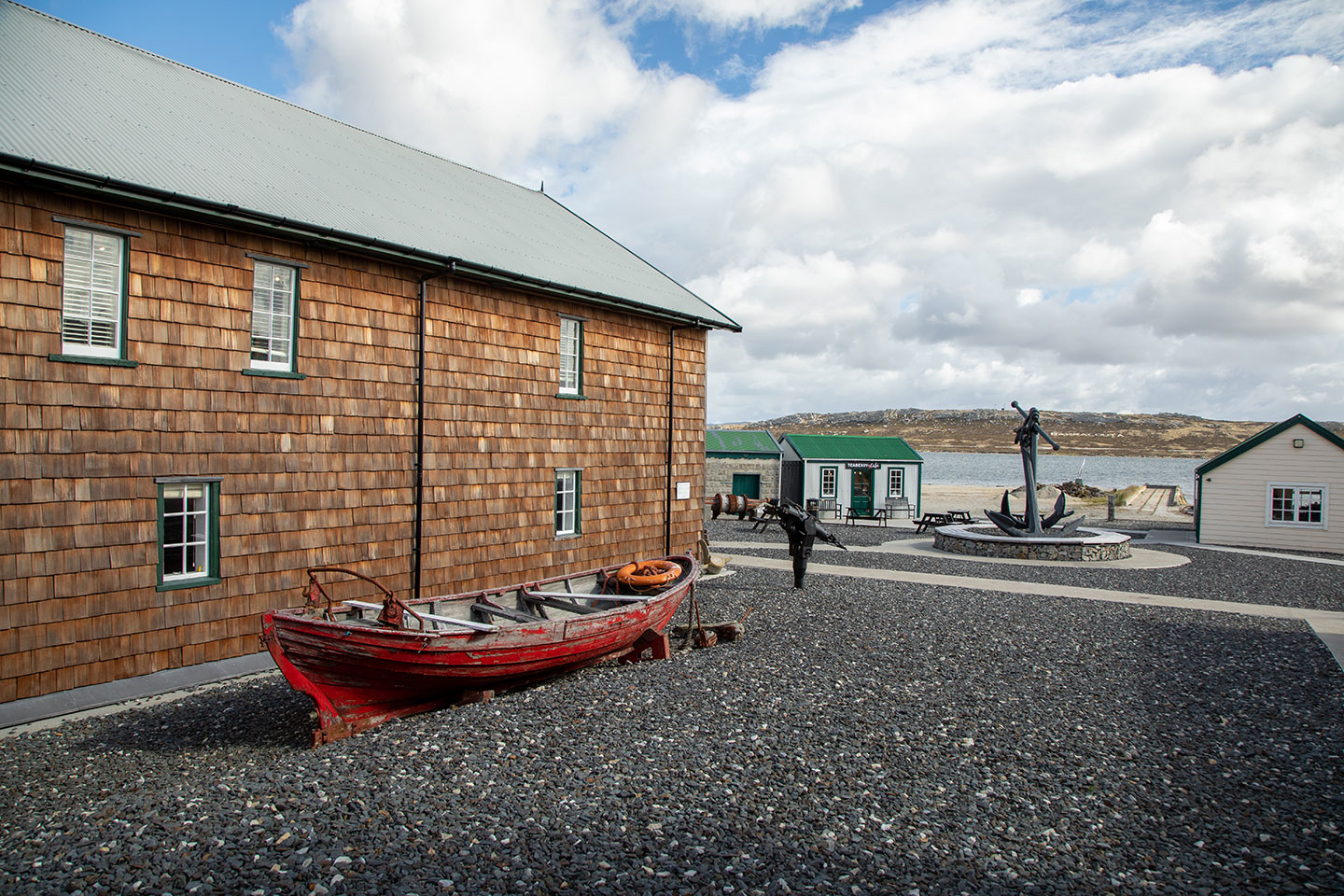 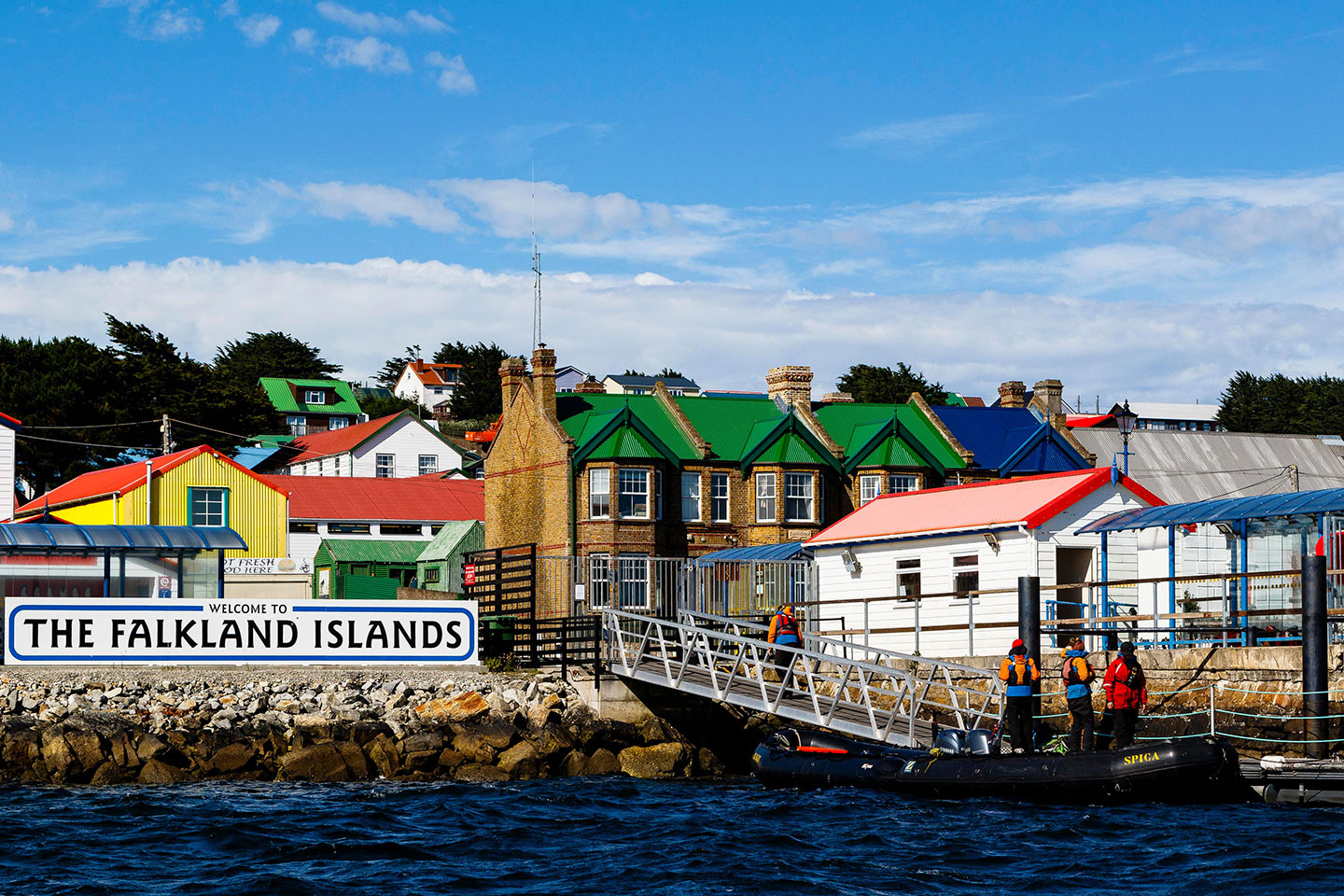 Port Stanley (population 2,400) is the capital of the Falkland Islands. Stanley, as it's often called,  reminds visitors of  a
traditional English village—including the red telephone boxes. Photo: Nicky Souness

Your onboard team of lecturers and specialists will educate you on the local flora and fauna, enabling you to make the most out of your time in the Falklands.

For more suggestions of Falkland islands sightseeing, see our “The Top Landing Sites in the Falkland Islands” blog.

Places to Visit in Falkland Islands

Wildlife. Culture. History. Birdlife. Rare flora. Rugged landscapes. The Falkland Islands offers diverse traveler experiences. Did you know that the Falkland Islands is home to staggering numbers of albatrosses, dolphins and at least five species of penguins? Expedition guide and award-winning photographer Acacia Johnson describes the destination as a photographer’s dream location in her blog, “Why I Love Traveling to the Falkland Islands as a Landscape and Wildlife Photographer.”

So, what are the places to visit in Falkland Islands with offerings that match up with what you want to see?

We’ve already talked about the archipelago’s capital of Port Stanley. Nearby is Mount Tumbledown, the site of a major battle that took place during the 1982 war between Argentina and Britain.

Steeple Jason Island is a must-visit if you’re keen to observe albatrosses. Did you know that about 70 percent of the world’s population of black-browed albatross are found at Steeple Jason Island, northwest of West Falkland, making it the largest colony of this species on the planet? It’s one of the numerous places to visit in the Falkland Islands if you’re a budding ornithologist. Experts estimate there are 63 species of breeding birds and 23 migrant species in the Falklands. One of the most sought-after species on the islands is the Inquisitive Striated Caracara. 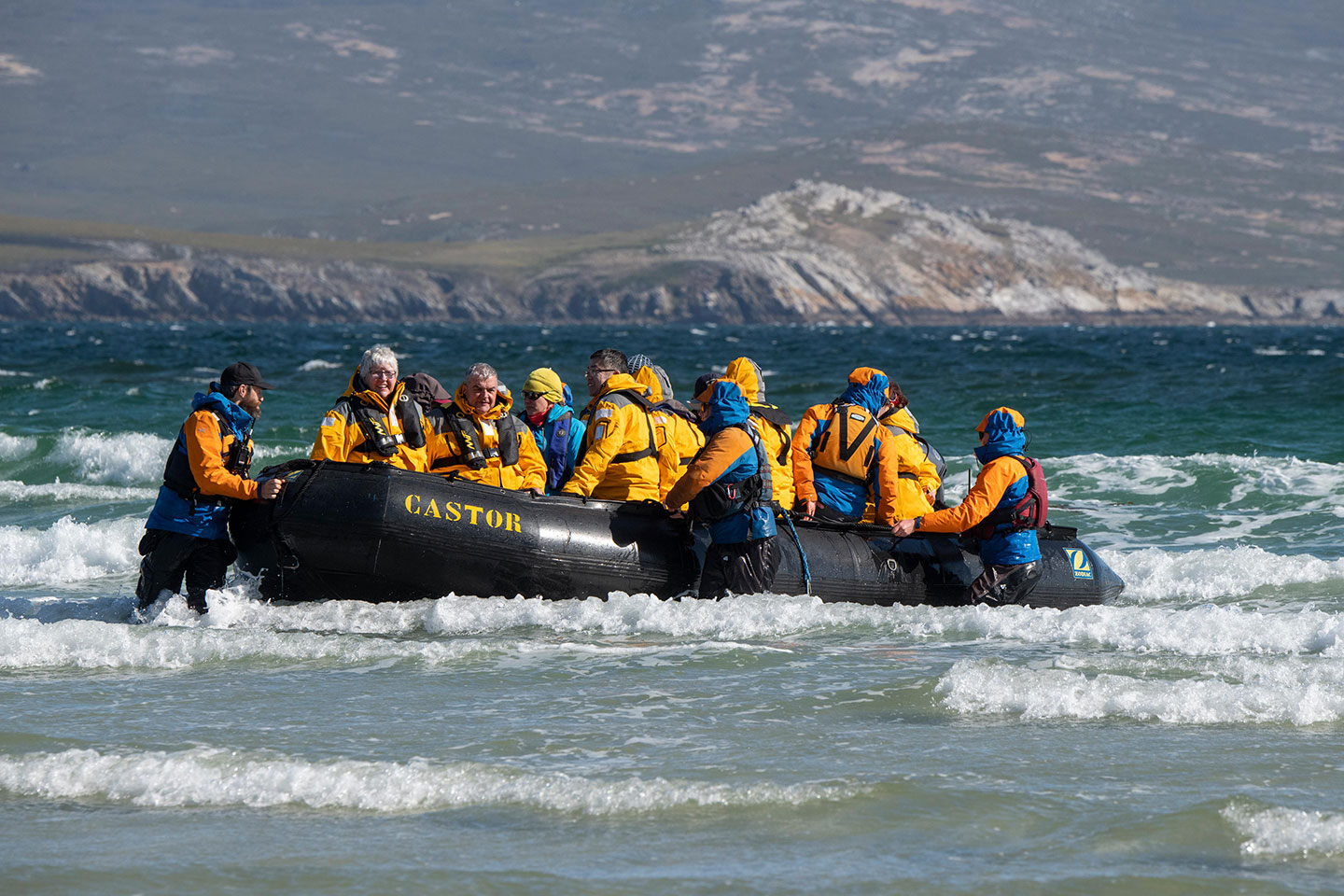 Travelers don’t always expect white sandy beaches in the sub-Antarctic but you’ve got lots of options in the Falkland Islands. For instance, there’s Elephant Beach (popular with dolphins) that stretches 4 miles (6.4 kilometres), and off the northwest corner of the archipelago are the white sandy shorelines of Carcass Islands.

Bleaker Island (don’t be dissuaded by the name), originally known as Breaker Island because of the huge waves, is worth a visit if time allows. The long sandy beach known as Sandy Bay is home to diverse birdlife, including Gentoo penguins and a large colony of Imperial cormorants.

Volunteer Beach, on East Falkland, is a 2-mile (3.3-kilometre) stretch of sand where you’ll find the largest colony of King penguins in the Falkland Islands.  A jaunt to Gypsy Cove will reward you with views of large rookeries of Magellanic penguins.

Cost of Visiting the Falkland Islands 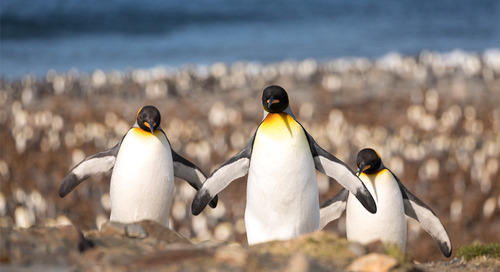