Have you ever thought about Antarctica and wondered “what must it be like to visit such a remote location?” As the world’s seventh and most southern continent, Antarctica, for many people, remains a mysterious place shrouded in layers upon layers of snow and ice. Most of the land is frozen tundra, but it is incredible to see when the sun hits it in just the right way. That illumination adds to the mysterious wonder of Antarctica.

Should you decide that a voyage to the southern continent is something to check off of your bucket list, what are the best places to visit in Antarctica that you don’t want to miss? If you’re going to make the journey, you want to see the places that are the crown jewels of an Antarctic experience. 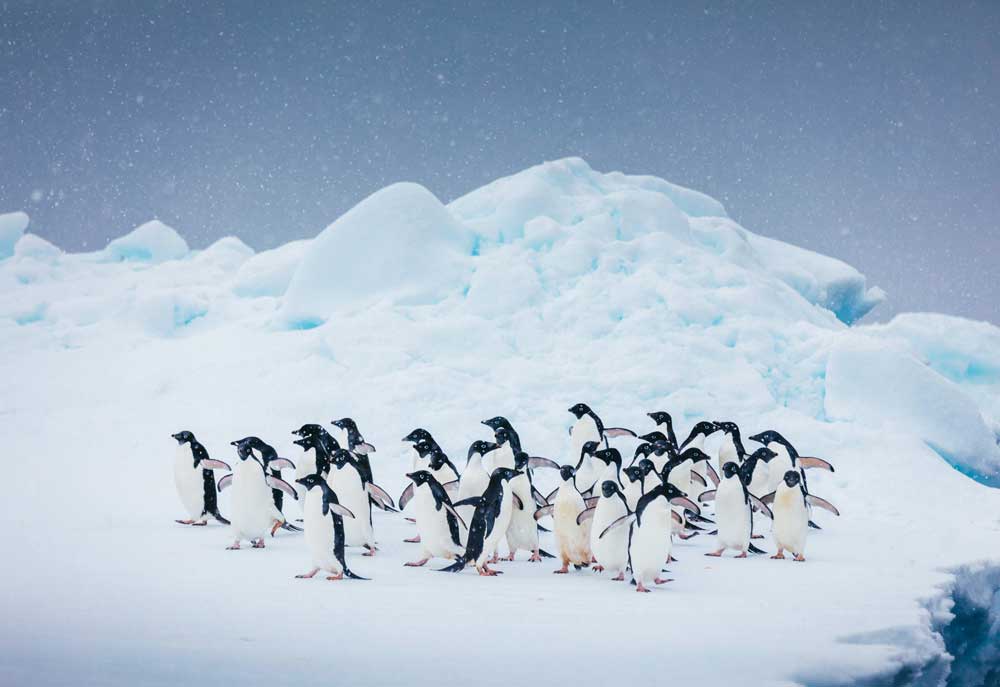 15 of the best places to visit in Antarctica

The Antarctic Peninsula is the gateway to the main continent, and traveling across this leg of the Southern Ocean will allow you to witness up-close views of penguins, whales, and other Antarctic wildlife. One of the best opportunities for you to experience the peninsula is aboard the Antarctic Explorer: Discovering the 7th Continent voyage, which is an 11-day journey to the Lemaire Channel along the coast of the peninsula. Along the way, you’ll have opportunities for flightseeing, Zodiac cruises, and even the jolting polar plunge experience. 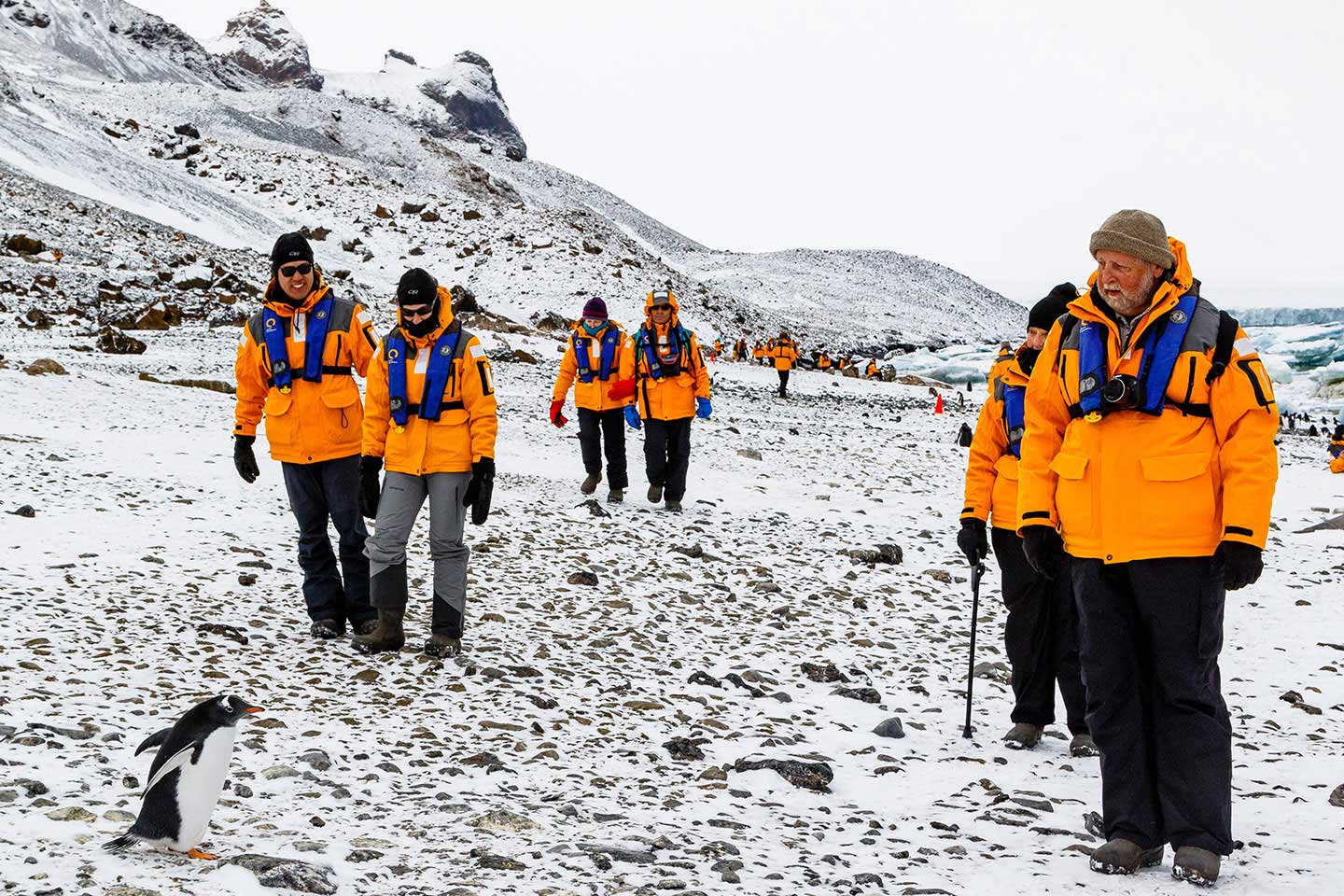 A mutual curiosity develops between penguins and humans on the shores of Antarctica. Photo: Nicky Souness

One of the highlights of the Antarctic Peninsula is Neko Harbor, where guests have encountered mammoth glaciers. You’ll get to learn about the history of the harbor, including how it was once used as a floating factory for whaling purposes.

Gold Harbor is the home of many penguin families, especially the regal King Penguins that hibernate on the nearby South Georgia Island for the winter months. You may also get to witness elephant seals playing in the water so take a few pictures of these playful animals while appreciating the rich biodiversity in the surrounding areas. 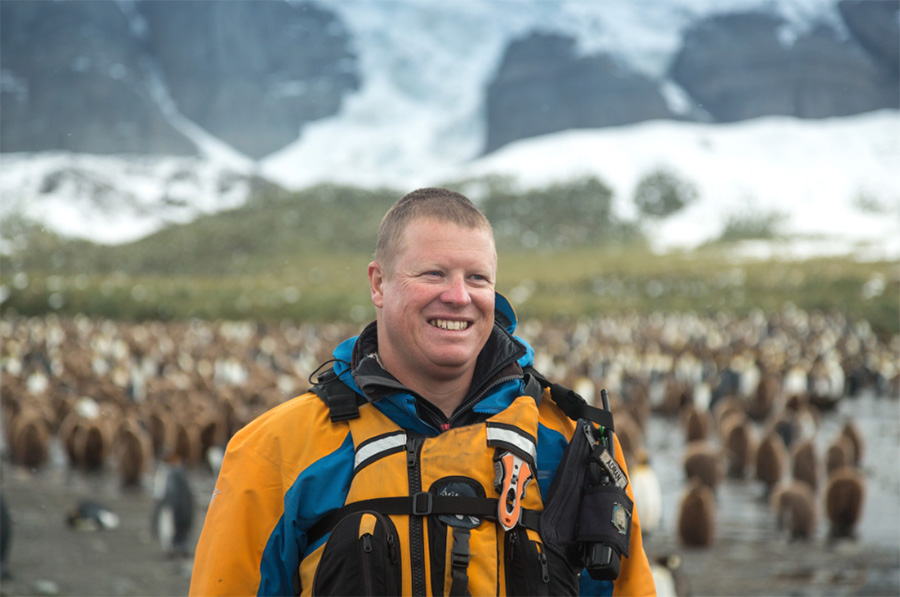 Another of the many gems that collectively make up the Antarctic Peninsula is Marguerite Bay. This little body of water is located on the western spur of the peninsula, and it’s surrounded by peaks of ice-covered mountains and historic research stations established by the earliest explorers of Antarctica.

Danco Island rests in the middle of the Errara Channel and stands 180 meters high above sea level. During your visit, you’ll get a chance to learn about the remains of the Danco Island O-Station, which was once used to survey and study the land before it was demolished. Today, the remains of the research station attract polar travelers. 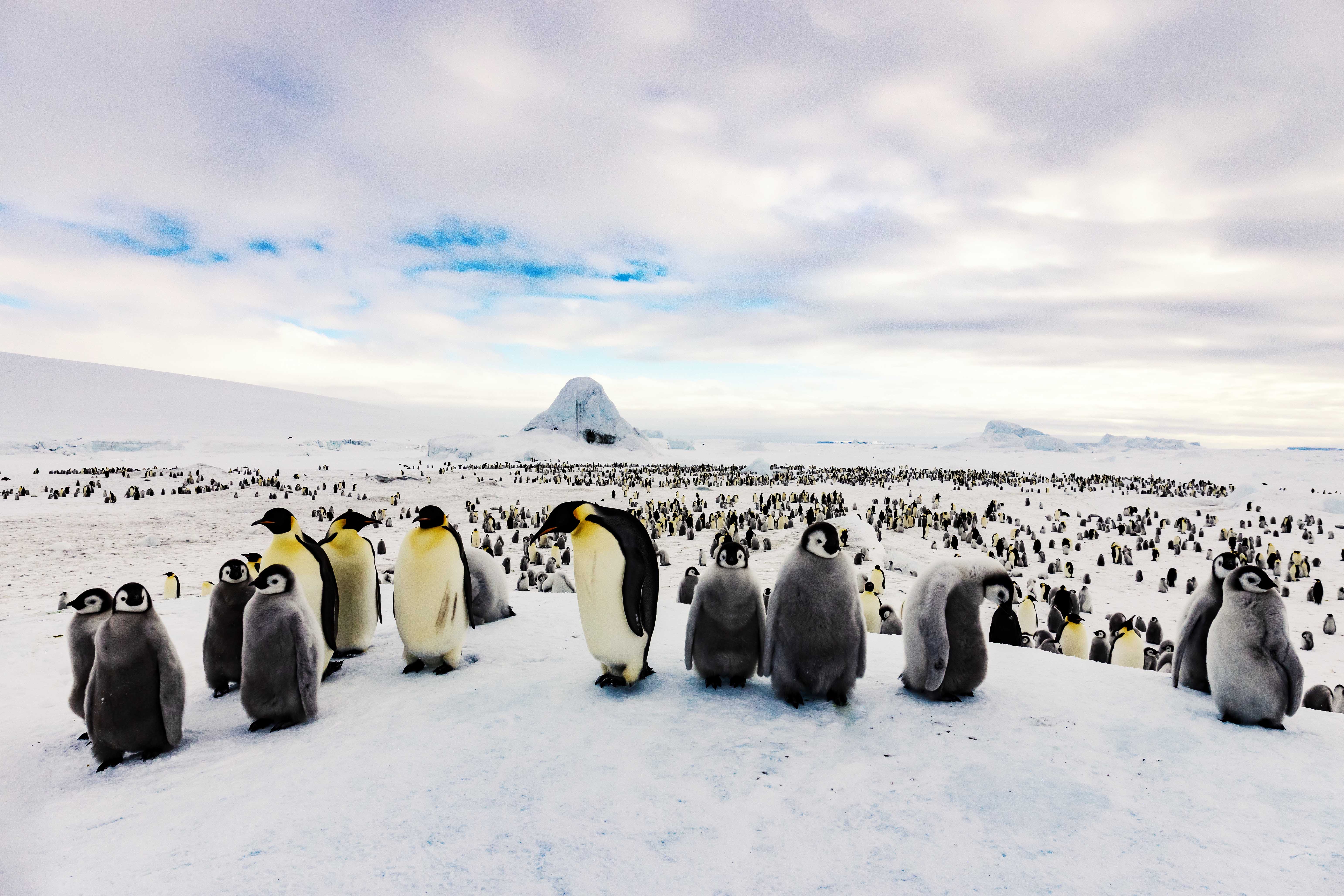 One of the world's largest colonies of Emperor penguins thrives at Snow Hill Island in the remote Weddell Sea
of Antarctica. Photo: Hugo Perrin

One of the hardest-to-reach islands off the Antarctic peninsula is Snow Hill Island. Polar ships must navigate through the ice-covered Weddell Sea for the chance to reach Snow Hill, in order to observe one of the rarest wildlife experiences on the planet: the 10,000-strong colony of ice-dwelling emperor penguins. You can arrange to witness this large colony of seldom-seen Emperor penguins on the game-changing ship Ultramarine, which will take you within reach of Snow Island, whereupon you’ll be transported by twin-engine helicopters and then join a guided walk across the ice (accompanied by penguin experts) to see the rare Emperor penguins and their baby chicks cavort across the ice of Snow Hill.

The South Shetland Islands are home to an impressive variety of wildlife. Penguins, seals, walruses, and other impressive animals that inhabit the island's coast and hunt for food in the waters near the shoreline. South Shetland is often one of the first stops on a voyage to Antarctica.

If you take the Fly The Drake adventure to Antarctica, King George Island is where you’ll land after flying over the 800-km Drake Passage. It’s where you’ll board your ship which will be your home for the duration of your expedition.  While here, you can visit a largely unused military base that was established decades after the first explorers arrived in Antarctica.

Elephant Island is one of the most rugged, inhospitable islands in the Southern Ocean. It’s located in the far reaches of the South Shetland Islands, and you’ll likely only experience this location from the comfort of your cruise ship. Your onboard polar historians will share the history of Elephant Island, particularly recalling how Sir Ernest Shackleton and his crew took refuge here when the ill-fated Endurance met its end in the icy Weddell Sea. 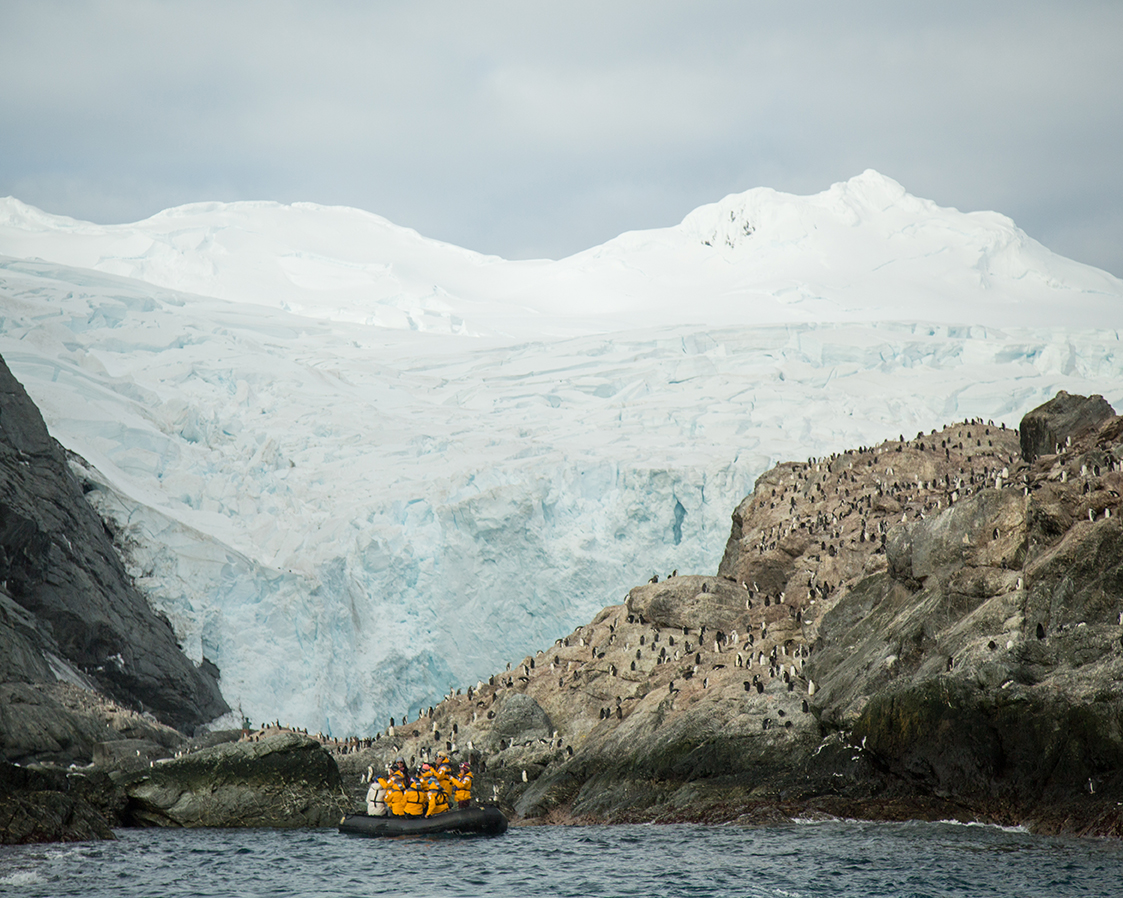 Similar to the Drake Passage, this is less of a destination and more of an experience. Penguins are the animal that immediately comes to mind when you think about Antarctica, and there's a good reason for it. Entire colonies (some numbering in the tens of thousands)  of penguin families waddle across the shores of Antarctica, emerging in the spring after hibernation to give birth to the next generation of penguins. Our trained adventure guides will lead you on extensive penguin tours to learn more about the various species of penguins that are found in Antarctica.

Another great Antarctic experience that many adventurers are passionate about is local bird watching. With such a rare and impressive variety of avian wildlife, bird watchers love to catch a glimpse of some of Antarctica’s rarely seen species. Just make sure you bring the right binoculars for the adventure. 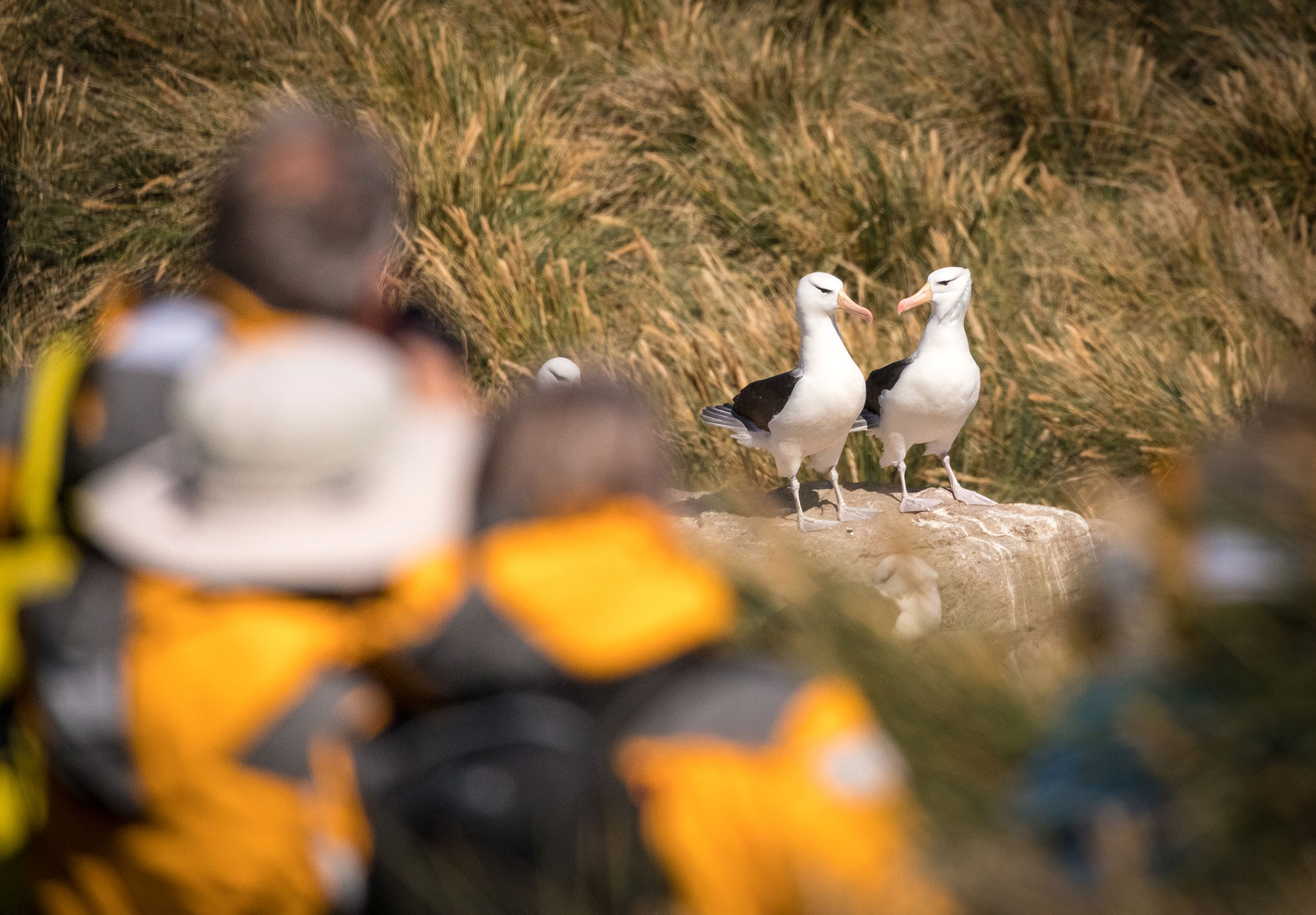 In the seas surrounding the Antarctic Peninsula are pods upon pods of whales that inhabit the Southern Ocean. The World Wildlife Federation has identified over a dozen whale species in Antarctica so make sure you have your camera ready to capture these incredible animals enjoying their time together.

How to get to Antarctica

We’ve identified a lot of different places and experiences for a journey to Antarctica. Now, the question to ask yourself is this: is there a way you can fit them all into one glorious adventure?

If you are looking for a voyage to see as many of the best places in Antarctica, one option is to join the Epic Antarctica: Crossing the Circle via Falklands and South Georgia voyage. This 23-day adventure includes visits to the South Shetland Islands, South Georgia Island, the Antarctic Peninsula, the Drake Passage, and a journey across the Antarctic Circle itself. This voyage also includes a crossing of the Drake Passage—both at the beginning and conclusion of your voyage. Along the way, you’ll have opportunities to join flightseeing adventures over certain parts of the continent as well as Zodiac cruises to explore floating islands and glaciers spread out across the Antarctic continent.

Two amazing northerly destinations to explore, but how do you decide between Greenland vs. Iceland travel h...

Is Greenland worth visiting? The world’s largest island has some of the best natural wonders and cultural e...