By Solan Jensen, continued from Part 1 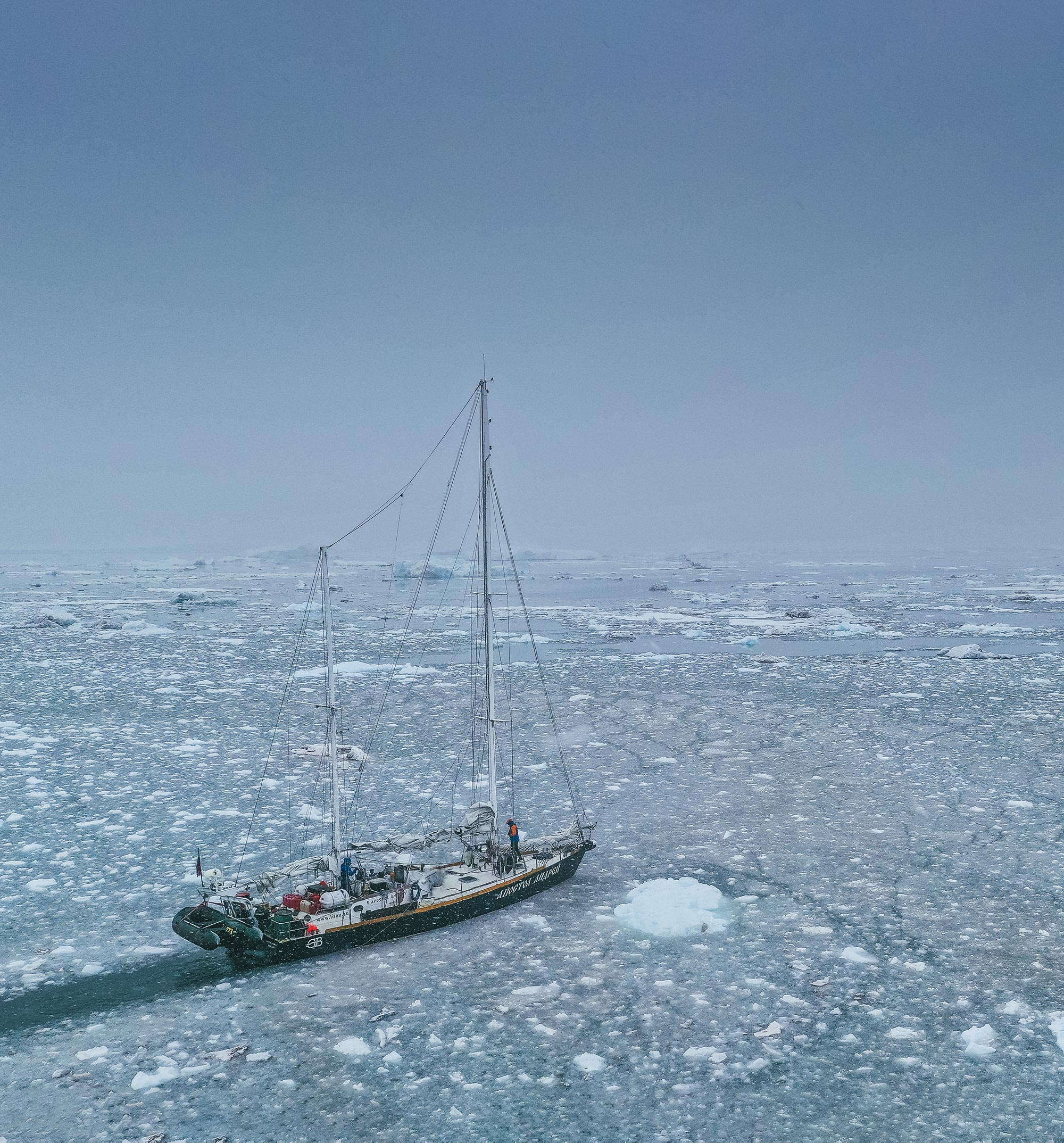 After pouring over the latest ice chart on Day 8 of our journey through Severnaya Zemlya, we determined our next realistic objectives: Samoyloyvich Island, which held potential because it was well situated for a walrus haul-out; and Domashnyy Island, a.k.a. Home Island, the location of the Ushakov base camp, and a world-renowned nesting stronghold for ivory gulls. 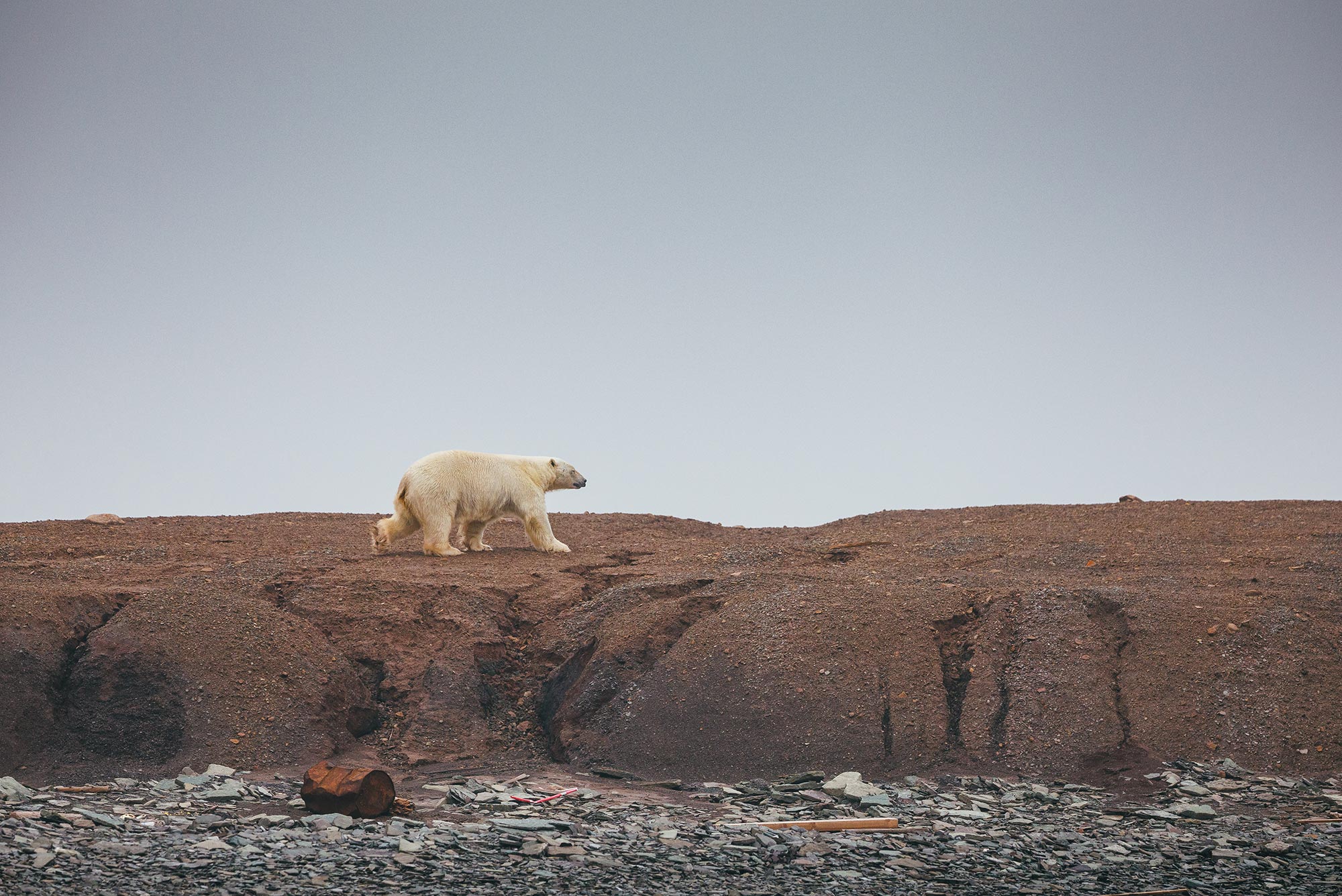 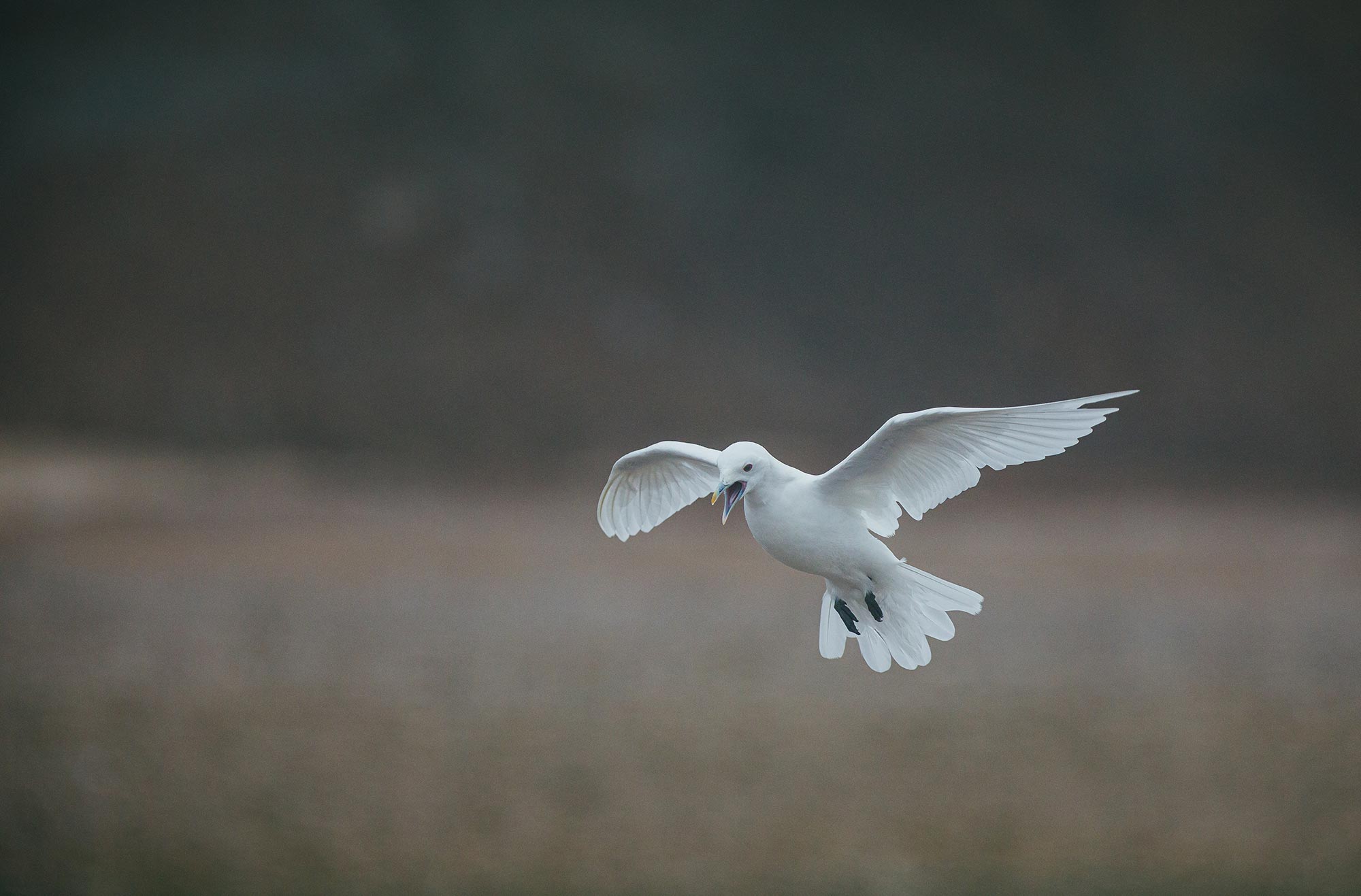 In the morning we encountered the trip’s first significant bands of sea-ice. The fog would thicken, occasionally lift, then return. After a big course deviation to bypass a field of ice, we approached the southern edge of Samoyloyvich Island, in the Kara Sea. There were remnant chunks of fast ice and a scattering of brash ice loosely washed up on the beach. Peering through the dense fog we saw crashing surf.  And just at that moment we caught sight of a polar bear standing on the empty beach. It seemed like it was waiting for us.

A few miles along the island shore we encountered another polar bear, this one weaving up and down the beach, climbing over beached ice. Both bears appeared to have substantial fat reserves for this lean time of year. We lingered, photographing, filming, studying the bears through our binoculars. Then it was time to leave this long-barren foggy island and head back into the sea-ice maze as we set our sights on Domashnyy Island.

The Apostol Andrey pushed its way through light brash-ice for a few hours. Listening to the noise from inside the ship, I suddenly had an inkling of what it would be like to put a metal bucket over my head while pebbles and gravel showered down on me. We knew we were approaching Domashnyy Island as the small winged ghosts of the Arctic began to appear in greater and greater numbers. The island is home to one of world’s most dense ivory gull breeding sites. Hundreds of nests dot the lowlands. Even after the breeding season, the place is alive with birds this time of year, non-breeders and juveniles socializing and feeding. 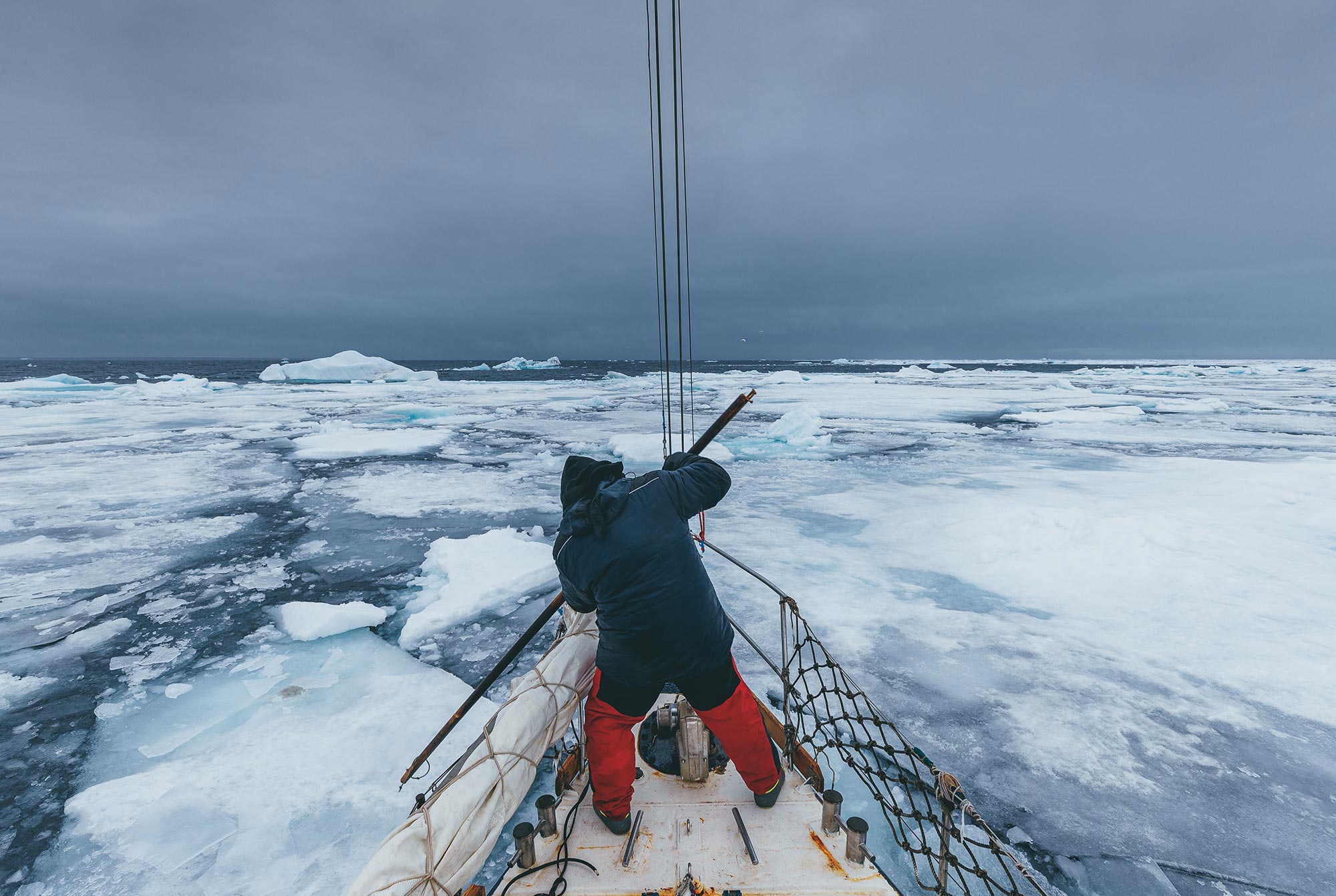 A history of human connections on Severnaya Zemlya

Domashnyy Island was the base camp for the first survey expedition of Severnaya Zemlya. The leader G.A. Ushakov, accompanied by his team of three men and 50 sled dogs, over-wintered at this site for two years as they studied and surveyed the coastline and parts of the interior of the archipelago. There is a memorial head stone to him and his team. Captain Litau, friends with Ushakov’s granddaughter who lives in Moscow, was grateful to for the opportunity to come ashore t to visit the memorial. The element of human history is so recent in these islands, which, as I mentioned earlier were discovered in 1913 and explored and surveyed in 1930-32.

Throughout the night we continued to navigate northward along the western edge of Pioneer Island, one of the main four islands that make up the Severnaya Zemlya archipelago. The icy waters demanded constant maneuvering. The wind dropped through the night and by early morning it was completely calm. The fog broke for minutes at a stretch and each time we were graced with the sight of a polar bear. One was swimming between ice flows, another was walking along ice flow, and we observed another hunting near the edge of the ice. 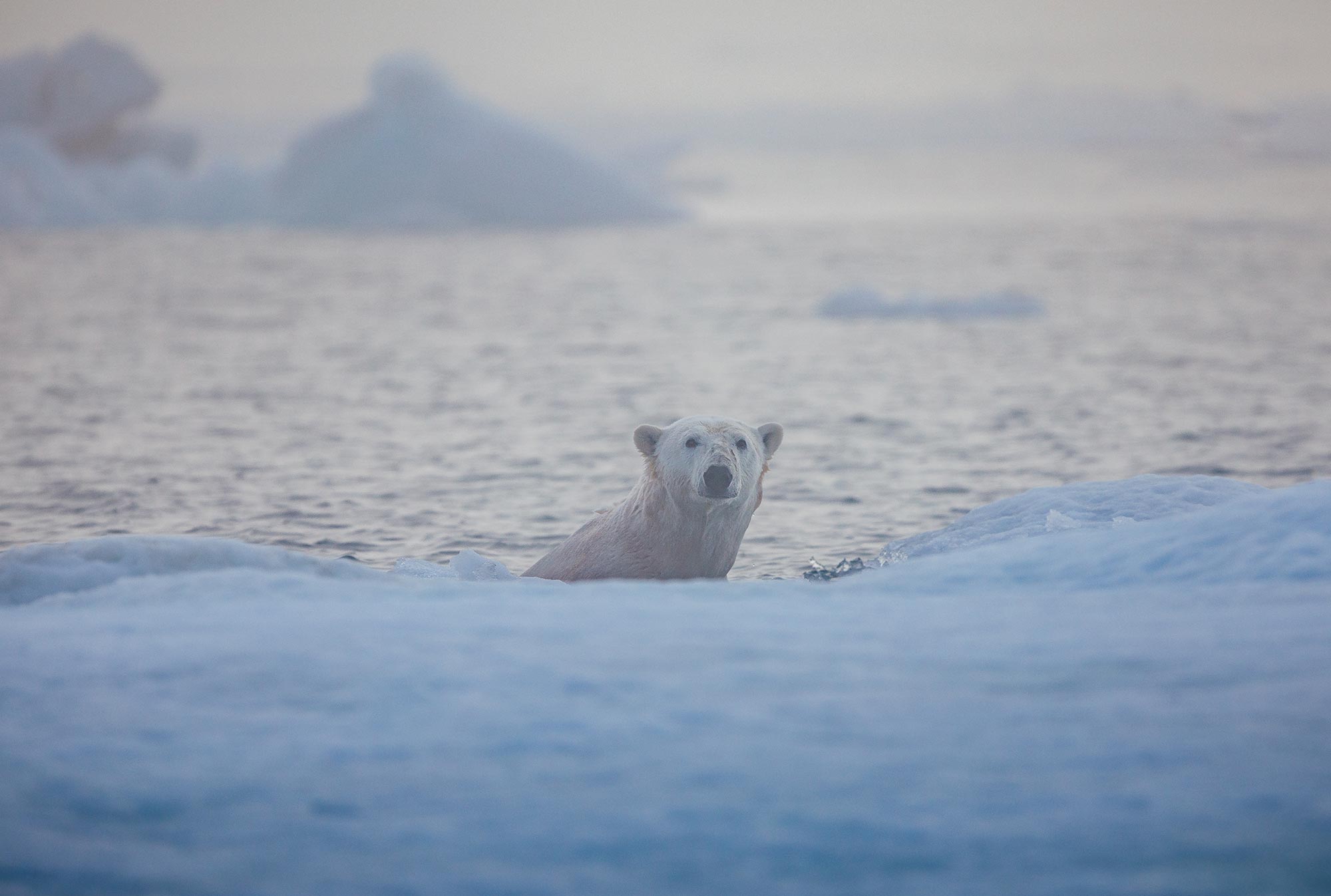 It was a distinctive feeling, somewhat difficult to describe, to encounter polar bears in their habitat from the deck of a 45-foot sailing yacht. Seeing a polar bear eye to eye leaves one feeling exposed. Guests on our scheduled sailings will, of course, will be on a larger vessel or in a Zodiac for such sightings.

Resuming our journey, we aimed for a bay on Komsomolets Island, the northernmost island of the archipelago. We’d been studying the island carefully on the nautical charts and topographic maps. We were drawn here by the relative protection of the bay. There was small note on a 25-year-old bird survey that reported the presence of both herring and glaucous gull colonies. The diverse terrain included valleys, rivers, and most notably the bay which was flanked to the north by the largest ice dome on Komsomolets Island, the Academy of Sciences Glacier, which covers an area of nearly 6,000 square kilometers. 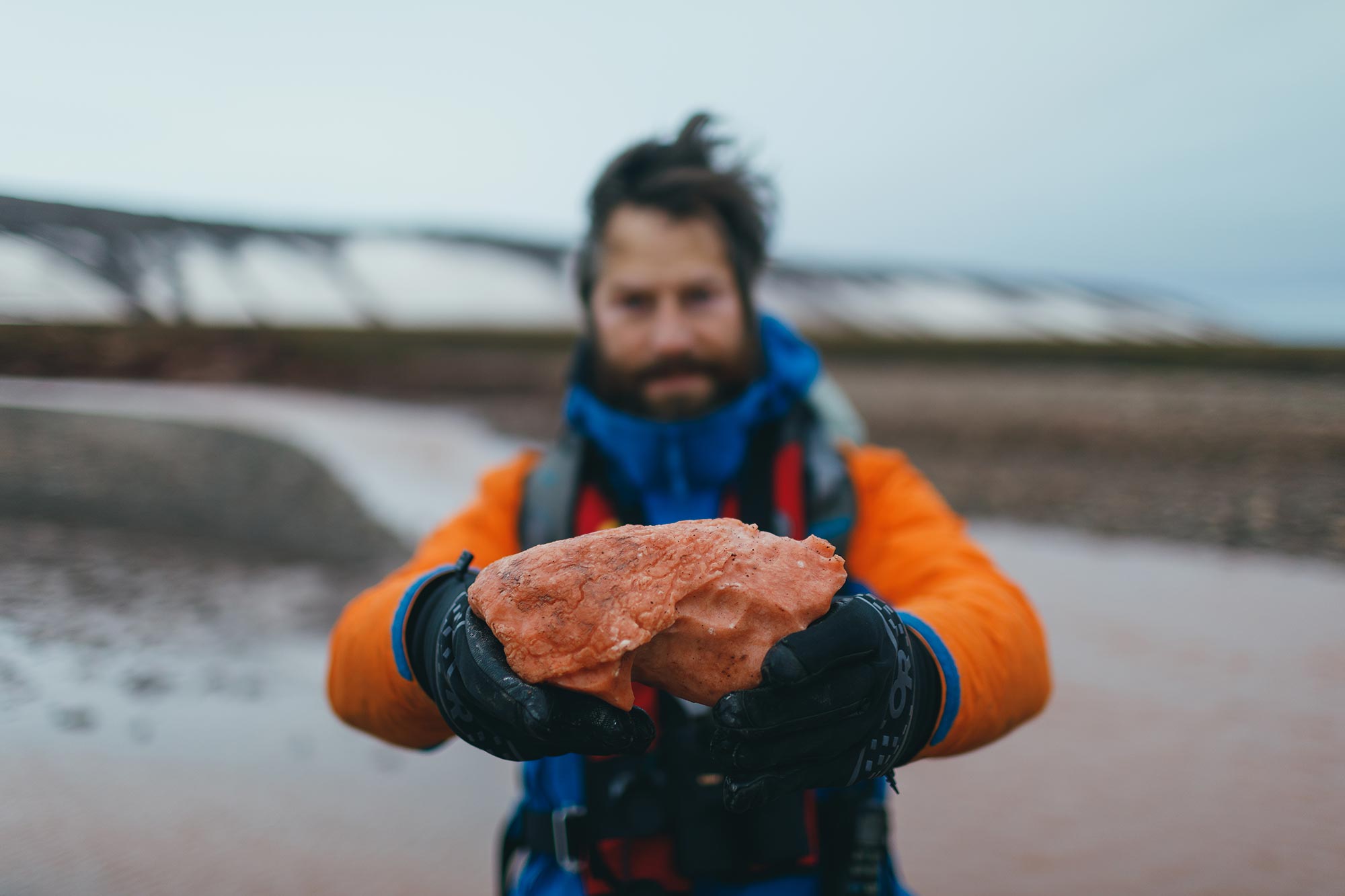 Solan Jensen clutches a specimen of the red rock that's found near the  Academy of Sciences Glacier, which is a large ice cap on Komsomolets Island. Photo: David Merron

Scanning the shoreline as we sailed deeper into the bay, we saw a valley of red rock which was also (according to our maps) the closest access point between the shore and the glacier’s edge.

We went ashore and set off up the red valley with the aim of getting a view of the face of the glacier. I walked at an excited pace in stride with the expedition surveyor, expedition photographer and polar bear guard. As we marched inland we encountered cold damp wind which forced us to keep moving to stay warm. Within 20 minutes we reached a plateau, and 20 minutes later we found ourselves approaching the grounded face of the Academy of Sciences Glacier.

The three of us, surveyor, photographer, expedition leader, involuntarily spoke in short repetitive phrases, the kind you speak when you’re lost in awe.  Something special was being revealed. We walked up to the edge of a ravine, at the cliff overlooking a maroon red river flowing between us and the wall of ice, the massive edge of the glacier. Iron-rich sediments suspended in the river lit by the sun gave us one of the most remarkable experiences of our journey. 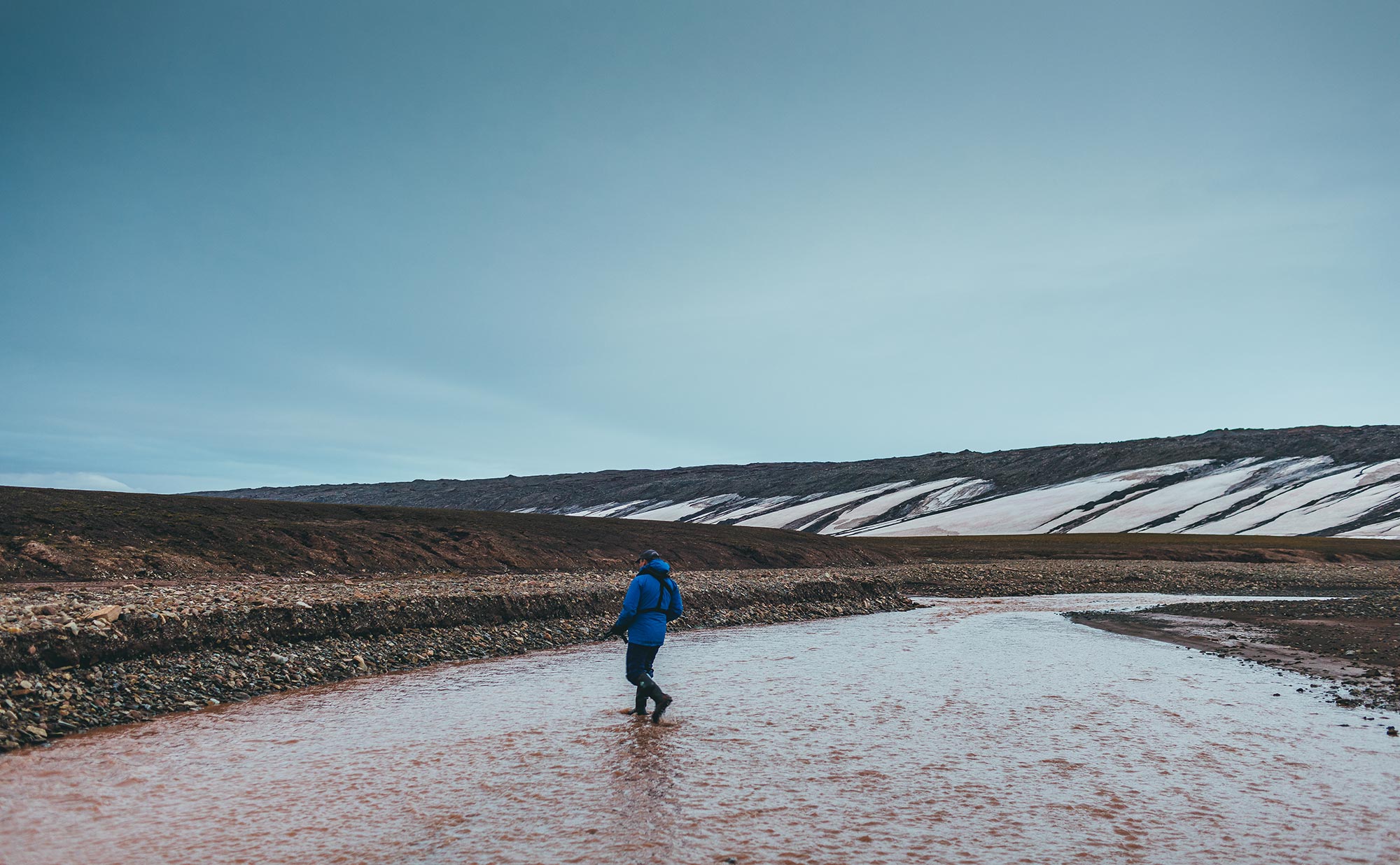 A team member wades through the glacial red river, the result of iron-rich sediments in the water. Photo: David Merron

We stood in silence, beginning to shiver and not caring. We felt like we'd been dropped into another geologic epoch. We felt lucky, grateful, and simultaneously experienced a sense of urgency. Our wonder refused to gave way to the immediacy of documenting what lay before us. Fog washed over the scene. We roamed the ravine edge, just looking, just looking around, trying to absorb the sense of this place on scale of the planet.

We agreed we needed to return that afternoon with all our imaging equipment to have the best go at revealing this place visually. This is one of the things we have come for, to reveal Severnaya Zemlya.

We hiked back to the vessel and were welcome with a merry greeting from the captain: “Today we are celebrating!”  He pulled out a bottle of Cachaça, a liquor he got from Brazil after his voyages in the Antarctic the previous year. While we were out exploring the land, a crew member had collected some high quality glacial ice. There was a small stash of limes and a jar of granulated sugar. Caipirinha day!

Needless to say, lunch was a delight, though some of us graciously declined the alcoholic version. We immediately ventured back out and headed up the red valley to the red glacial river, this time armed with all our equipment for drone footage and photography. We waited at the ravine edge ready for the fog to disperse.

The perspective from the elevated view of the drone was beyond measure. That night all we could do was look at the images, as if to reaffirm to ourselves what we’d found… likely something few if any humans had ever seen. 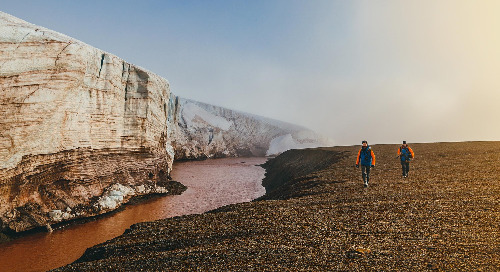 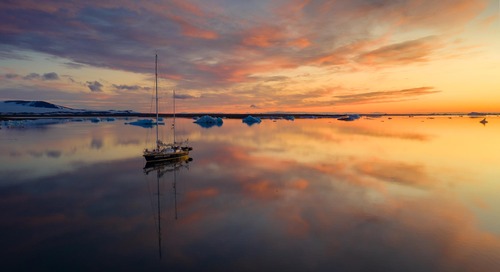