Greenland is the world’s largest island. While Greenland is home to some growing urban communities, people travel up here for the breathtaking natural landscapes and wildlife. Greenland is one of the must-see destinations on any polar adventurer’s bucket list. It also happens to be one of the optimal places on the planet to witness the Northern Lights. 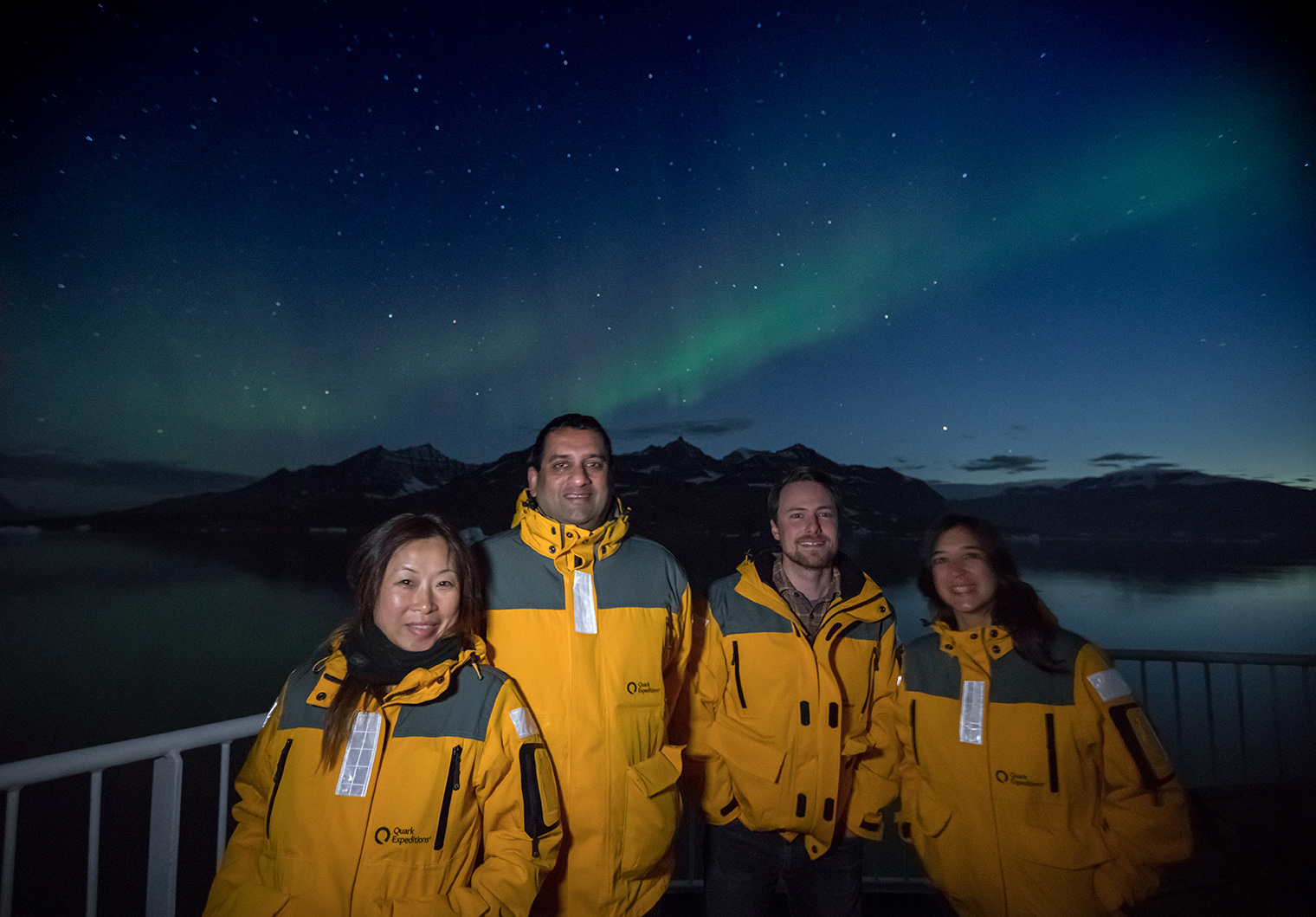 A group of Quark Expeditions guests bask in the glow of the Northern Lights. Photo: Acacia Johnson

Greenland was first settled by Inuit First Nations, who used thick ice sheets to migrate onto the island following the Ice Age. European explorers came to the island in the late 900s when Erik the Red led his troop of Vikings to the island’s shores. It was Erik the Red who coined the name Greenland to make it an attractive destination for other explorers.

Despite its name, nearly 80% of Greenland’s landmass is covered in impossibly thick sheet ice. This has created incredible coastal sights of frozen tundra, icy fjords, and powerful glaciers. For people attracted by the alluring beauty of shimmering ice in the glowing sun, Greenland is a paradise.

The best time to visit Greenland for the Northern Lights is during the period from late September into March. This is the time of year when the nights are at their longest in Greenland, which is what creates the best opportunity to witness the Northern Lights unobstructed by both natural and electronic lighting. The palette of colors emanating from the Aurora borealis can light up the sky, particularly when viewed from remote locations like the Northeast Greenland National Park. 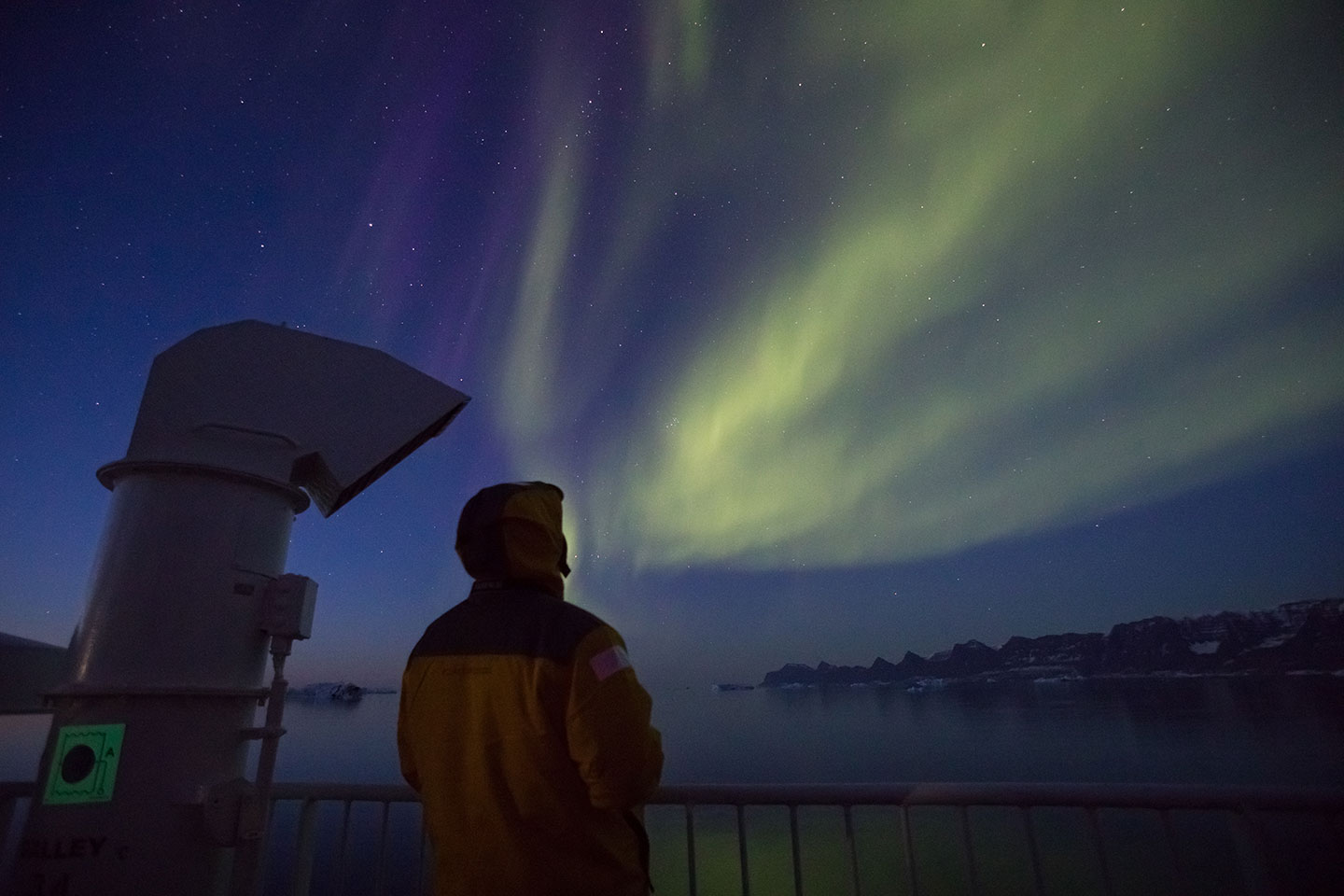 A Quark Expeditions guests watches with awe the Northern Lights from the deck
of a polar vessel. Photo: Acacia Johnson

While at sea near the icy shores of Greenland, your travel guide will call your attention to the sky if weather conditions allow for a clear view of the Northern Lights. This voyage is bookable from September into October, which aligns with the best time of year to see the northern lights in Greenland.

The Northeast Greenland National Park is one of the best places to visit in Greenland. The protected areas of the park include 972,000 square kilometers of the island’s landmass. However, there are many other places to explore, as well as activities to do, while enjoying a journey through Greenland.

Ella Island is one of those locations. Home to the incredible King Oscar Fjord, Ella Island lies on the outskirts of the Northeast Greenland National Park. It’s separated from the mainland by a river that’s frequented by narwhal whales. You can join a Zodiac cruise to enjoy some memorable whale watching while in Greenland.

The Greenland Ice Sheet is another remote location that could provide a chance to see the Northern Lights. The Ice sheet includes natural wonders like the Tasermiut Fjord and Lindenow Fjord.

You can also book an alpine kayaking adventure or one of the mountain biking excursions.

What is the best way to visit Greenland? 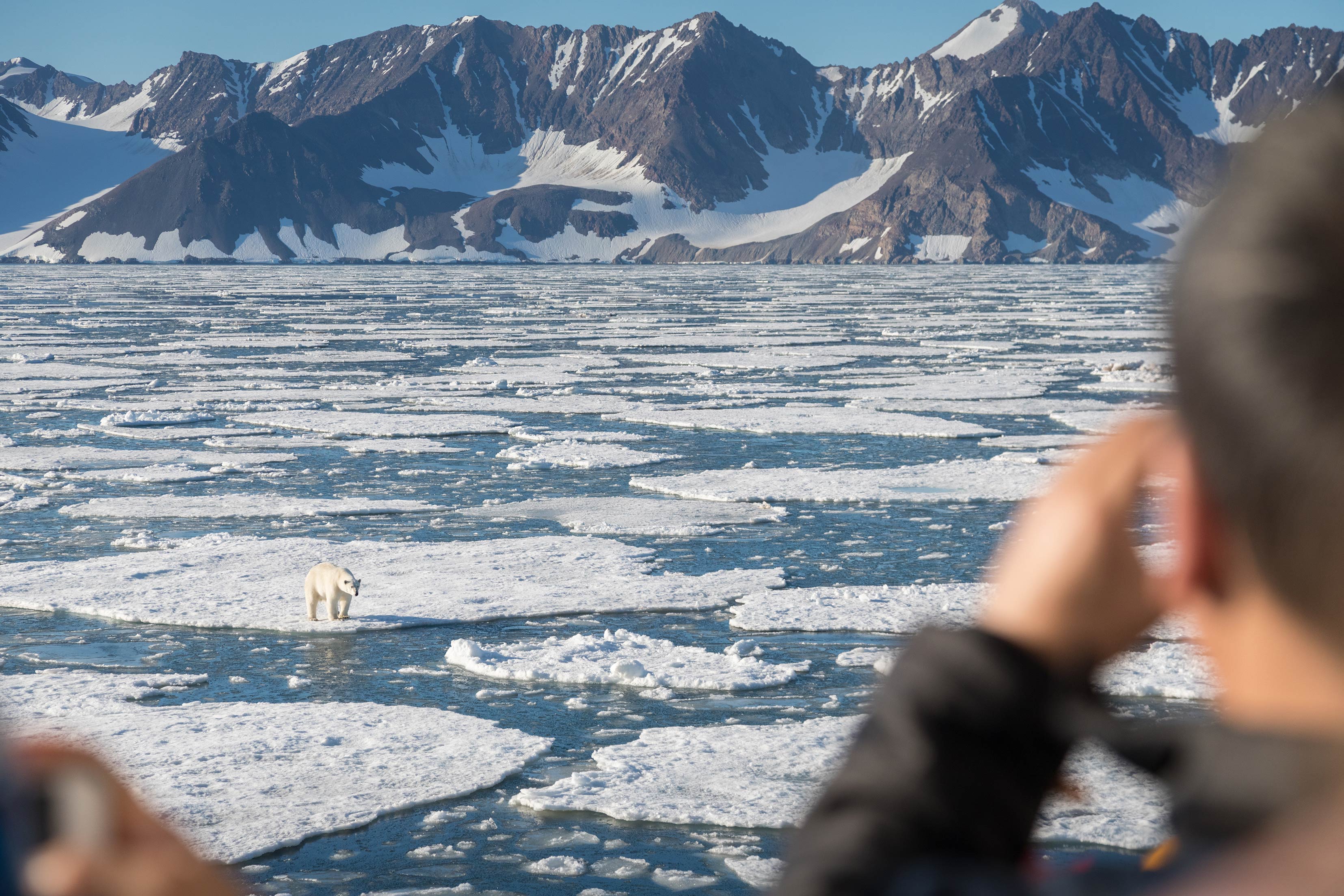 Travelers get to enjoy polar bear sightings and views of the Northern Lights on the same expedition. Photo: Acacia Johnson

The best way to appreciate all that Greenland has to offer is to see as much of the island from different vantage points. That’s why we recommend traveling aboard our Greenland Adventure: Explore By Sea, Land, and Air adventure.

As the name suggests, you’ll get the chance to witness Greenland when approaching the island by sea and taking in the amazing view of glacial ice illuminated by the sun. While aboard your vessel, you join Flightseeing and Heli-hiking, as well as mountain biking while on land. These are some of the many off-ship adventure options available in the Greenland Adventure: Explore By Sea, Land, and Air itinerary. Nature is best viewed from as many different angles as possible, and this 9-day expedition grants you all three opportunities to see the land.

Most of our journeys to Greenland explore the east coast of the island, including parts of the Greenland National Park. But if you want to visit the western side of the island, you’ll want to consider the Essential Greenland: Southern Coasts and Disko Bay adventure.

This 15-day journey begins in Iceland. However, the ship sails along the southern coast of Greenland with notable stops along the way, including the historic capital of Nuuk. During your visit, you’ll have a chance to view the Hans Egede Church and Hans Egede statue near the waterfront that serves as a memorial for the founder of both landmarks.

Other notable stops include the charming town of Sisimiut, the beautiful Ilulissat Icefjord, and even the Disko Bay itself. While there, you can enjoy Zodiac cruises to remote parts of the bay and get an up-close look at some of the most impressive icebergs floating along the shoreline. 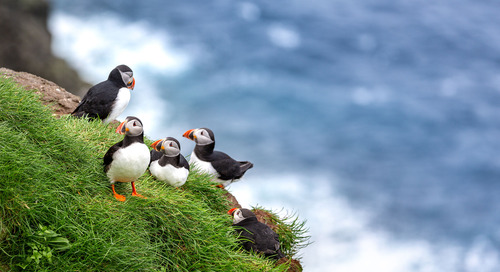 If you want to go bird watching on the Faroe Islands, what should you expect? This guide will prepare you f... 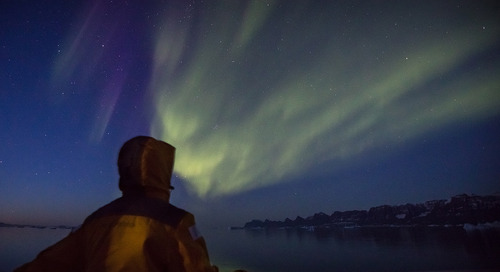 When is the best time to visit Iceland to see the Northern Lights, and what other adventures await on the i...