Home » Blog » What to expect when you travel to Antarctica: An expedition diary
× Share this Article

Our first day in Antarctica, after a pleasant crossing of the Drake thanks to impeccable timing on the part of Captain Oleg having controlled our speed to avoid any trouble, was Barrientos.

It was challenging with a definite wind and choppy water. The landing and cruising was a good introduction to the fact that we are on an expedition on which we met our first Antarctic residents the Chinstraps. Despite a somewhat blustery afternoon we loved observing the activity within the colony. The chicks had grown so much since we were last here. No longer were they the grey balls of fluff with a pointy bit sticking out, equally demanding however, but so much taller, wetter, dirtier, we won't say smellier, but just as wonderful.

Nature moves very quickly when time is of the essence. They do not have long. 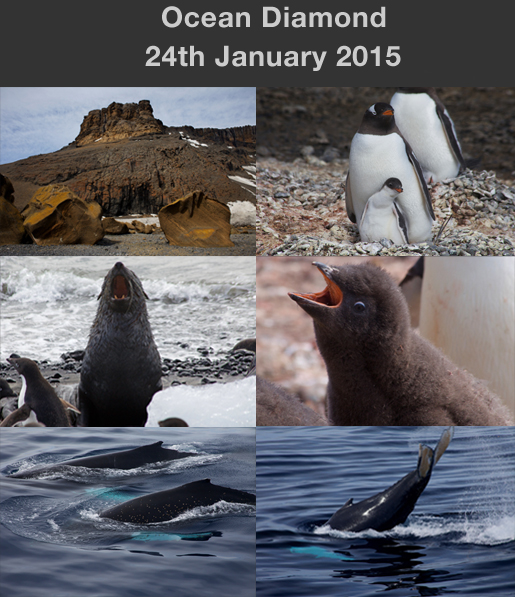 Today we arrived at Brown Bluff. Although the cloud and rain had long passed and we were greeted with sunshine the wind was pumping at around 40 knots. We chose to sit and wait for a while to see if the elements would subside to allow a landing. We were tantalisingly close to one of the most spectacular landscapes with 20,000 pairs of breeding Adelie and Gentoo.

We waited and eventually got the call that a landing was going to be made. The forward party deemed it safe and gangway operations began. What greeted our guests was a first time close up encounter with the Adelie set in probably the most awesome volcanic landscape. Brown Bluff is a geologist's paradise but after spending a few minutes appreciating the extraordinary power from below the earth's crust which formed the huge mountain and the discarded boulders lying on the beach, attention was quickly drawn to the first sighting of creches within the colony.

The Adelie chicks had outgrown the nests,  nominated parents took responsibility of nursery school teachers as the rest went out to feed. These chicks grow quickly and, in order to be ready to make their first forages into the ocean in which will they will spend their next two or three years,  their parents have to keep the food coming. The Gentoo were about a month behind and measurably smaller. Their time will come.

It is a fascinating spectacle as some chicks wander into other creches only to be rudely told off to return to their own group. It is not dissimilar to our own nursery schools except we use kind words and not a beak. The Skua constantly fly overhead searching for a wayward chick but the guardians are fiercely vigilant over their wards.

We were even visited by a male Fur Seal who came to check us out but decided it all looked just a bit too hectic on shore. The Adelie highway was like rush hour in Manhattan. No way through.

Our afternoon plan A was to go to Paulet to spend more time with Adelie but we came across an impenetrable wall of sea ice which blocked our path.  It was a sight truly worth stopping for as the carpet spread for miles. But as we were about to leave, as if by design, Hump Backs appeared along the edge of the sea ice and Captain Oleg maneuvered the Diamond to afford us all the best view. The whales did not run and hide but approached us and gave us a wonderful display of fluke slapping.

All in all a pretty amazing couple of days.

Over the last 2 days we have enjoyed a wildlife fest like no other.

Cruising around Graham Passage we came upon Humpbacks with calves fin slapping and just generally having a good time. Completely at ease with our zodiacs they moved in breaking the surface just feet from our bows.

In gloriously sunny conditions we were given a wonderful display by these huge but graceful creatures.

Moving on to Portal Point, our first landing on the continent, again nature was waiting there for us with Crabeaters and Fur Seals hauled out on the ice, one with a tag on it's flipper. Not seen very often.  The ice bergs were perfect with just the right subtle cloud cover to allow the inner blue to glow. The short hike to the dome opened up the whole panorama with a dramatic sky giving depth and atmosphere. Stunning to say the least, and what a setting to just sit on the virgin snow, taste some crystals and reflect on the majesty of the landscape where we are privileged to be.

But we did not move on, preferring to stay the night to allow our campers to enjoy a night in one of Antarctic's most beautiful locations.

The night was filled with silence briefly interrupted by booms of carvings from the glaciers and overturning bergs, Turns and Seals calling to each other along with the occasional snore from a neighbouring bivvy bag. The light was magical, the low cloud producing extraordinary blue hues over the mountains with patches of light filtering through to highlight the ice begs which lay below.

This morning we sailed into Foyn Harbour with all the remnants of the whaling industry.  Time to reflect on what it must have been like in the days of the factory ships when the sea ran red.  But now, surrounded by the enormous glaciers, it has become, or always was, a place of spectacular beauty. 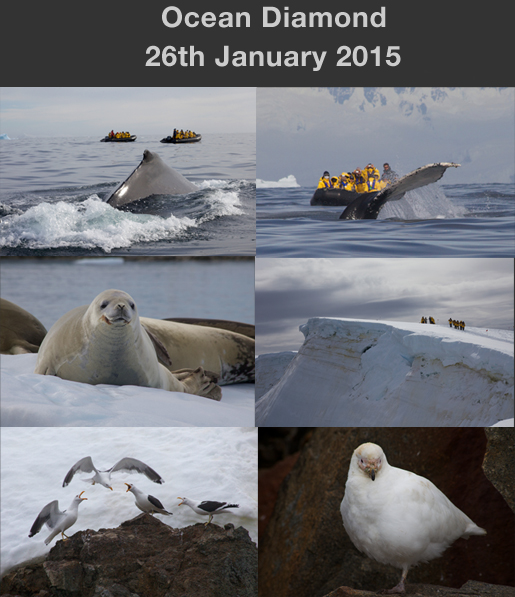 The Terns and Kelp Gulls were going wild for a reason only they will know. the noise almost drowning the outboard motors on the zodiacs.

Everywhere you looked there was some drama or another happening on the cliffs overhead.

Between Foyn and Port Lockroy we must have counted around 64 Humpbacks out there. Quite a record for a 3 hour journey.

Port Lockroy is always a real pleasure where we can spend time with the custodians of Base A and the Gentoo they hold under their wing.  The chicks are so big it is sometimes difficult to differentiate between adult and chick, except the ones spread out on the rocks asleep dreaming happy thoughts of the next krill meal are the next generation. But you cannot ignore the Snowy Sheathbills who are ever present. Scavengers who will eat anything, cleaning up the mess, but so beautiful in flight, like Turtle doves But when you look deep into their eyes you have to wonder how any bird can have evolved in such a way. It is a real challenge to produce a flattering photo of these weird birds.

Comforting thought that, thank heavens, they must find each other attractive. 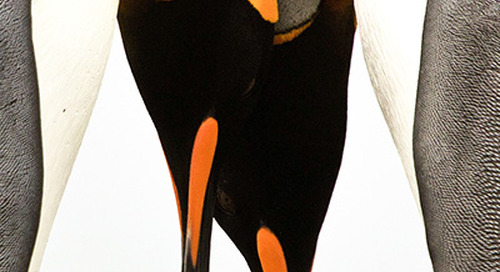 Till Death Do Us Part? Animal Mating in Antarctica

Antarctica is the most remote of the world’s seven continents, but that doesn’t mean its native inhabitants... Living the dream: An Antarctic Explorer voyage with Quark Expeditions

This blog post first appeared on http://www.discover-the-world.co.uk/. Penguin enthusiast (and Discover The...