If yesterday was an exercise in how knowledge, understanding, patience and self-belief won the day, then this morning looked like déjà vu. The infamous South Georgia wind which we had skillfully managed to find sanctuary from had remained with us overnight. Before we had even raised our heads from pillows we could feel the movement of the ship and with that our hopes of an early landing at St Andrews faded.

We went searching for shelter along the coast towards Stromness but it was wild. There was not a crest of a wave which had not been violently ripped apart and smashed into horizontal spray. This was South Georgia at its most extreme, but within this mayhem rainbows spanned the mountains and nature's immense power and beauty engulfed us. It really was something to behold.

But we wanted to hit the water, and the decision was to head to Cumberland Bay and Grytviken. Conditions were far from conducive and the radio conversation from King Edward Point was that it was a bit 'blustery' at the shore line, a typically English understatement.

We had bought time with earlier quick decisions between Captain Oleg and Woody, our Expedition Leader, and waited to see if things would die down. They decided to head further inwards to the Nordenskjold Glacier and miraculously it was like a dimmer switch had been turned down, and the call was made to prepare for a Zodiac cruise along the glacier. It was perfect. 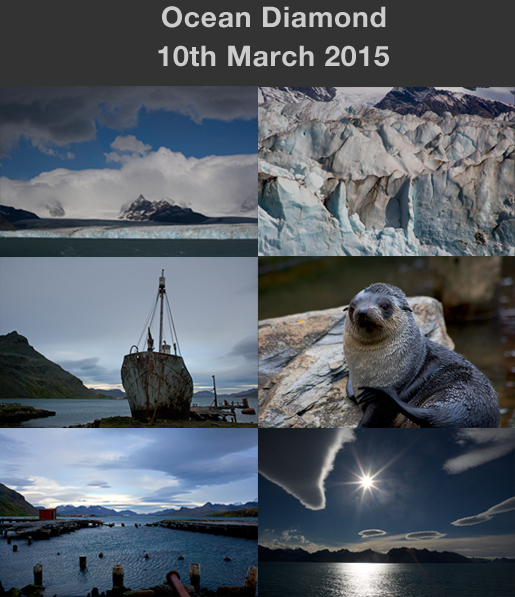 Scale is so difficult to measure and that's why we use range finders, but the enormity of the ice wall dwarfed the Diamond, and the Zodiacs looked like specs of dust on the camera.

At 1.9 nautical miles (3.5 km) wide, and the height 4 or 5 times the depth below the waterline you can get some idea of this phenomenal moving mass of ice which was born after millions of years of winter. The light moving from one end to the other between the clouds revealed the depth of color that lies within the panorama. Large carvings exploded from the face. It was, quite simply, breathtaking.

Behind us, back towards Grytviken, the swell and wind appeared to be relaxing and as soon as we were onboard we were put on standby for a visit to Grytviken. Our master plan came together allowing us to make our very last landing of the season. How does this happen, when every element tries to prevent? A wonderful collaboration of minds, knowledge and the desire to achieve.

If you have never been here, it is the "we will get there and succeed" Quark philosophy, and the leadership from the top, that allows this to happen. Adrenalin was pumping and we could not wait.

How poignant is it that, at Grytviken, where Shackleton finally arrived to secure rescue for his men, we also laid foot on land for the final time and paid our respects to the 'Boss'. Storms create their own magic, the katabatic winds form magical clouds of fairy stories. Those one would paint on a child's bedroom wall and we were fortunate to be there and witness their beauty.

Have we been blessed? Oh yes.

And on that we set sail NW and awaited what the Scotia Sea had in store for us on the way home. Our adventure has not finished yet.

Coming from a fashion background, Photography has taken Simon to some of the most spectacular, but demanding, parts of the world. Working with adventure clothing brands in deserts and frozen places he discovered his passion for landscape and exploring light.

Simon presumes this is how he was invited on his first Arctic Expedition Voyage. Since then he's been fortunate to have made many trips to both the Arctic and Antarctic as well as capturing the Northern Lights in Norway.

Simon is never happier than when he's holding his camera and gazing into a landscape which many only get the opportunity to see in a Richard Attenborough series. His aim on every voyage is to inspire others to fall in love with their cameras, understand how much they can achieve, and explore the world around them.

Simon's other passion is diving with his underwater camera. It's so much fun when the seal pups are playing in the shallows! 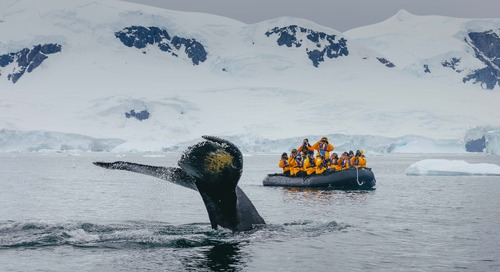 Quark Expeditions is a proud and longtime member of AECO and IAATO, two organizations that share our dedica... 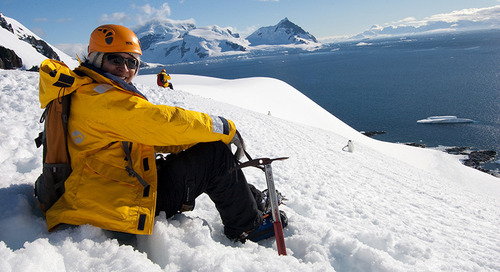 It’s Worth the Climb: Antarctic Mountaineering with Guide Jean Cane

What’s more unique than journeying to the bottom of the world? Climbing to the top when you get there!