Nick Bertozzi pored over his Adventures of Tintin comics as a child, living vicariously through the travels of the young Belgian reporter. It lit a spark, he says – one that inspired him to get off the couch and do some traveling of his own. Bertozzi hopes his new graphic novel, Shackleton: Antarctic Odyssey, will do the same for children and adults alike.

Shackleton is the real-life adventure story of Sir Ernest Shackleton's 1914-1917 trans-Antarctica expedition, one of the most harrowing and heroic exploration stories of all time.

Shackleton and his crew set out from Southend on August 4, 1914, en route to Antarctica via Buenos Aires and South Georgia in search of the South Pole. They'd spent an extra month in South Georgia alongside knowledgeable Norwegian sailors preparing for the Weddell Sea crossing and waiting for the ice to disperse, yet the expedition would fall short of his goal. In January 1915, just a day's sail from their destination, the sea ice closed in around The Endurance and trapped it in place for the winter.

Bertozzi, creator of the Lewis & Clark comic, spoke with Quark Expeditions about his motivations and process for telling Shackleton's Endurance tale. He wanted to share the story of Shackleton and his men in a factually accurate account that also captured the spirit of the journey. He also wanted readers to understand the emotion of their plight – of being shipwrec 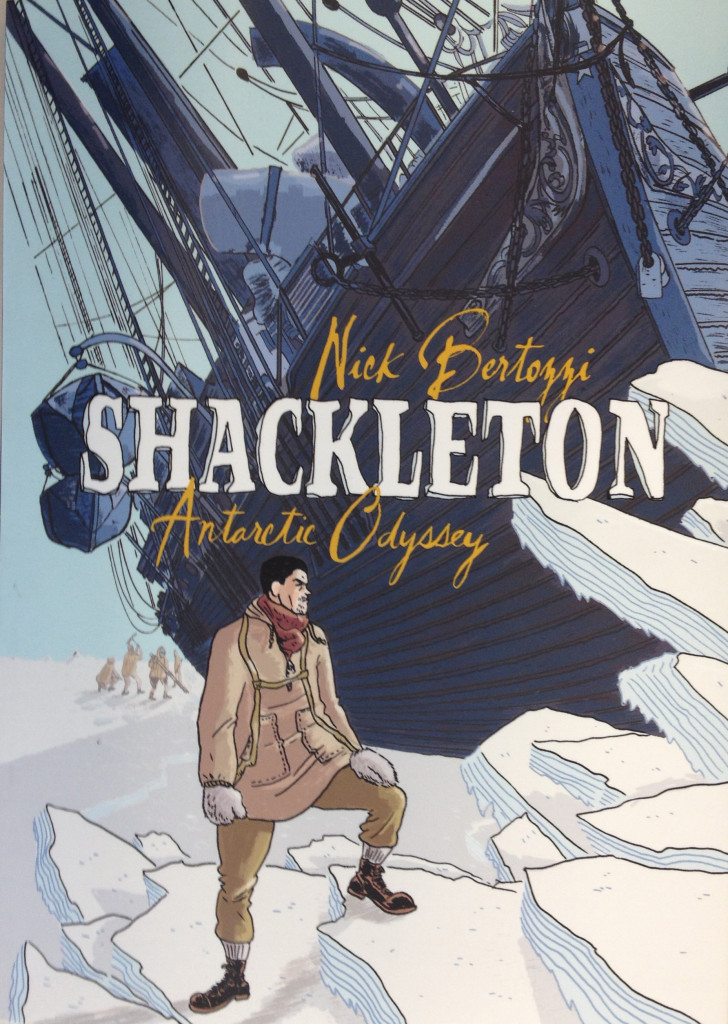 His interest in the adventures of Sir Ernest Shackleton took flight when his mother went to see the James Caird at a museum outside of Boston. "She relayed the story to me and as she was speaking, I realized right away that this was a story I wanted to turn into a comic book," he said. "It's a real story, but the arc of tension just continues on an upward trajectory until there's this sweet release to the end when they finally make it home."

Inspired, he watched an IMAX movie and read books about The Endurance, but felt as though much of the conflict in modern accounts of the events had been eked out in favor of characterization. According to Bertozzi, "The conflict with this person against nature was strong enough without having to introduce emotional conflicts. That made me even more inspired to create a visual narrative of this story.

"I had a few friends who had gone to Antarctica on vacation cruises – my uncle, a geologist had gone down there with a group of people and was showing me some pictures," he remembers. "As soon as I saw these pictures, I knew it was going to be so much fun to draw."

Bertozzi credits modern-day adventurer and Royal Navy engineer Seb Coulthard with much of the period-specific knowledge he needed to keep Shackleton true to time of the expedition. Coulthard sought out Bertozzi five years ago after finding an initial chapter he had published online.

"I was contacted out of the blue by Seb, who was doing an expedition recreating the boat journey and crossing of South Georgia on foot. He wanted to use my comic for his website," Bertozzi recalls. 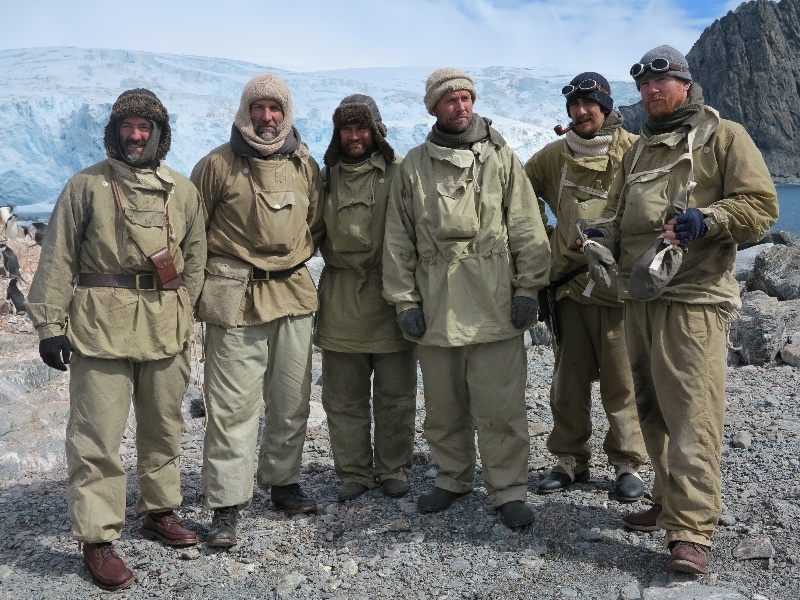 "I did get a firsthand look into this journey they undertook and Seb was instrumental in helping me with some of the finer points and reference of the journey. There's just no way you could find that without the help of someone who had gone on a journey like this. They used period equipment, a replica of the James Caird, and went right down to the clothing they wore," he said. "He helped me with ship plans, maps, clothing and props – all sorts of things. The book would not be nearly as complete had he not contacted me." 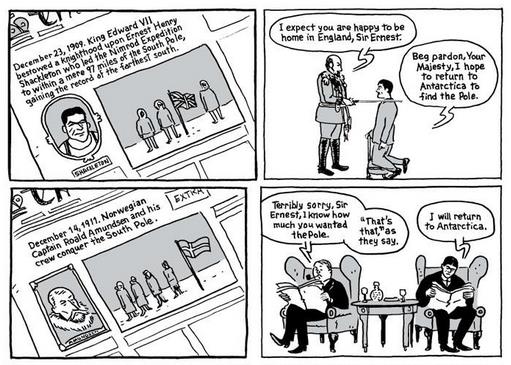 Bertozzi had to improvise in places, even as he attempted to get the spirit of the journey right and stay as close as possible to the facts. The newspaper accounts, for example, are fictional in that he was unable to surface the actual news coverage, though they are true to the story and help with exposition.

"There was no film record of that point, you know?" he laughed. "They weren't writing every word they ever said in their journals. I felt as though narrative captions would intrude on these characters. You would see them as characters performing a play."

American comic book writer/artist David Mazzucchelli helped Bertozzi bring his ideas to life in a graphic novel that doesn't rely on the beauty of the drawings, but uses them instead to tell Shackleton's story, rich in emotion and information. "He really gave me a lot of insight into design and helped me achieve the correct balance of information and illustrations on the page," he said.

And just how would Sir Ernest Shackleton feel about Antarctic exploration today – particularly that it's become accessible to more people?

When asked to put himself in Shackleton's boots, Bertozzi laughed. "I've never thought of that… I think he really liked the idea of going where no one had gone before. I think he'd be a little ticked off! But he'd be there as much as anyone else," he said.

"It's clear he was obsessed with Antarctica and had he been born a hundred years later, he'd be there now, digging holes and climbing mountains, but he'd be ticked off he couldn't have it to himself."

Bertozzi plans to continue sharing the stories of great figures in the history of world exploration in his next works.

"I was joking around that I'd do a little Shackleton comic about a child Shackleton running around Ireland pretending he was climbing Mt Everest or touring on the polar ice caps. We'll see!" he promised.

"I think one could certainly do an entire book about his journey with Robert Falcon Scott, or the Nimrod expedition – those are great stories. Or even the period after he returned from the Expedition of Discovery, when he returned for WWI and what he went through there, would be a great story."

Descendants of polar explorers Shackleton and Scott have joined Quark Expeditions as Experts-in-Residence on a number of Antarctic cruises, regaling passengers with tales of their ancestors’ journeys a century ago. This year, we're pleased to offer Nick Bertozzi's Shackleton: Antarctic Odyssey in our on-board shops for passengers. It's a great chance to relive Shackleton's adventures in the very place they happened, one hundred years ago.

Nick Bertozzi shares his drawings, musings and web-things he finds interesting on his Tumblr and personal website. You can connect with him on Twitter for answers to any questions about Shackleton. 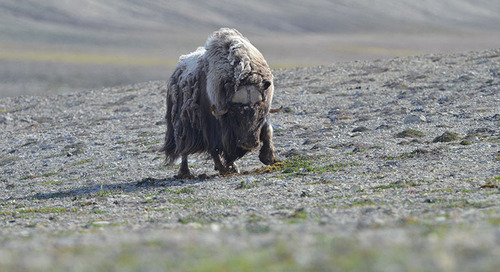 When we think of Greenland, a formidable, rocky and barren span inhospitable to life comes to mind. However... 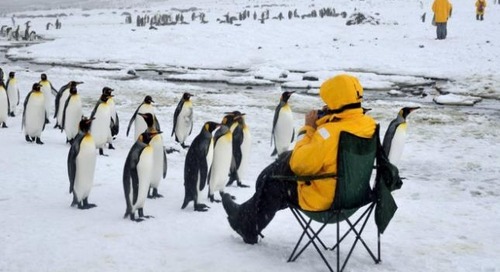 Long before they captured the hearts of audiences in movies like “March of the Penguins” and “Happy Feet”, ...