Home » Blog » What Animals Live in the Arctic? 5 Arctic Wildlife You May Spot in Nunavut
× Share this Article

What Animals Live in the Arctic? 5 Arctic Wildlife You May Spot in Nunavut 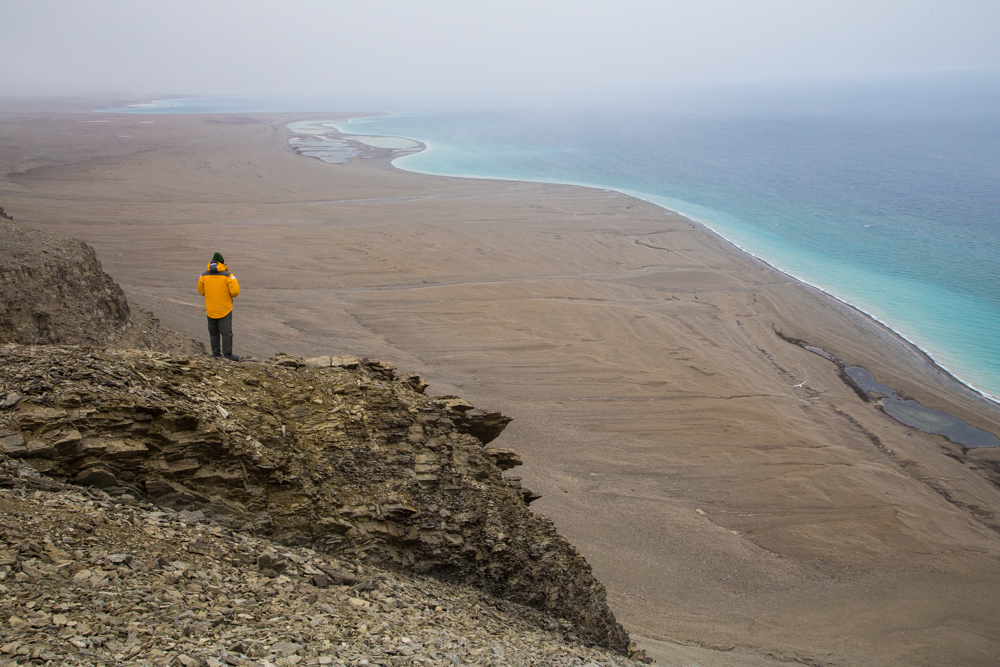 I might be the only person to ever have stood in this very spot.

There aren’t many places on earth as pristine and untouched as the Canadian High Arctic, where such a thought could be entertained and actually plausible. Brutal winds and temperatures render the Arctic inhospitable and largely inaccessible for most of the year. But in those brief summer months of midnight sun and surface thaw, the vast, fiery summer tundra comes alive.

It’s during that short window that a small number of Arctic Watch Wilderness Lodge guests are given an exclusive front row seat to an Arctic teeming with tenacious plants and fascinating animals. Widely regarded as the world’s best place to observe beluga whales, the region around the lodge on Somerset Island, Nunavut, is also home to some of the Arctic’s most beautiful and exotic animals. This is the realm of arctic fox and hare, muskoxen, and even that elusive, gigantic carnivore of the Arctic, the polar bear.

Of course, there’s no guarantee you’ll see any one animal in particular on any polar expedition; that’s the nature of an authentic exploration experience. But one thing is for sure: Arctic Watch and its surrounding tundra are among one of the best places on the planet you’ll have the opportunity to spot these arctic creatures in their natural environment.

Guided by true explorers and expert wilderness guides, you have the best chance possible to see some of these 5 intriguing residents of Canada’s Far North. 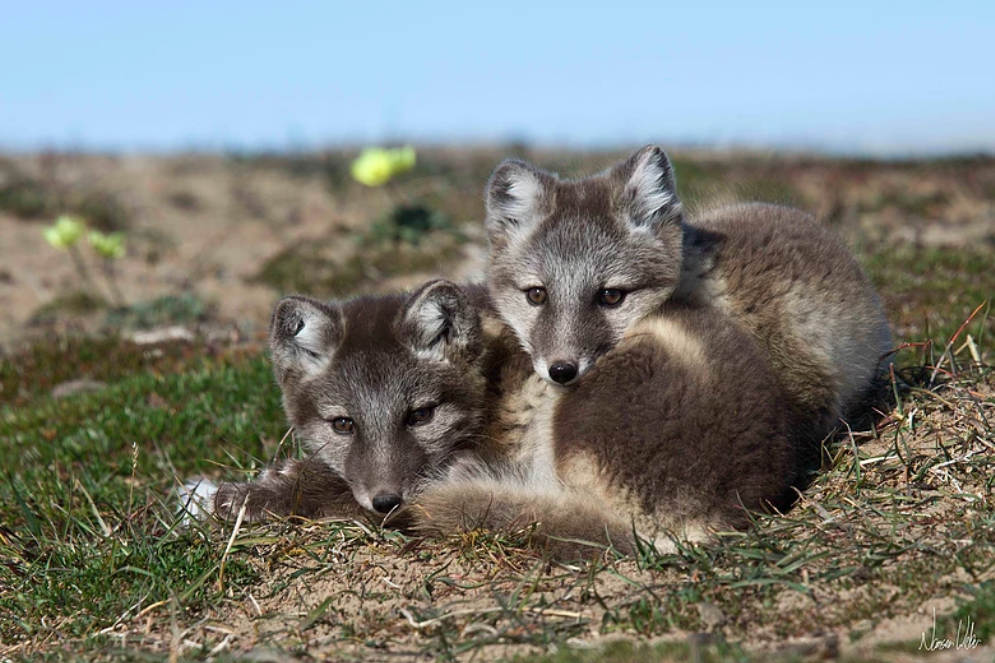 What animals live in the Arctic? These curious arctic fox keep a den on the tundra near Arctic Watch Wilderness Lodge. Photo courtesy of Nansen Weber Photography

White or blue-gray by winter, during the summer months you’ll find the arctic fox sporting its alternative camouflage coat of brown and gray to blend in with the tundra’s seasonal landscape of rocks and ground-hugging vegetation. Spring brings a typically large litter of arctic fox pups, up to 14! So it may be a hiker, fat bike rider or ATV rider’s delight to see these inquisitive, playful youngsters frolicking about the tundra – and mom at her wit’s end trying to rein them in. 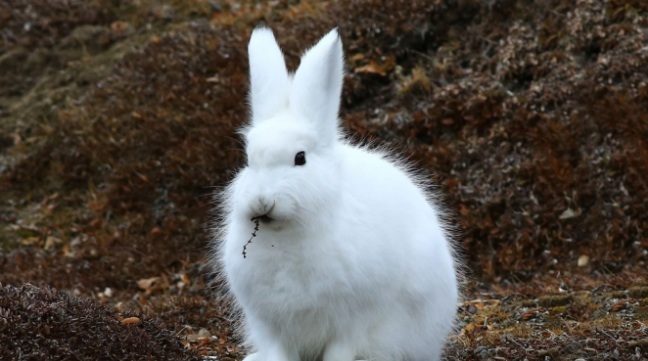 The arctic hare, pictured here nibbling on a piece of tundra flora, is another of the animals that lives in the Arctic. Photo courtesy of Nansen Weber Photography

Like the arctic fox, the arctic hare changes out its snowy-white winter wardrobe for a blue-gray hue to conceal it from the sharp eyes of its predators. And like the Arctic fox, these extreme northern hares give birth in the spring and early summer, though not as prolifically – averaging anywhere from two to eight offspring per season.

Somewhat larger than rabbits found in more temperate climes, the Arctic hare uses its elongated hind legs to sprint up to speeds of 60 kilometers per hour – another adaptation to help it elude predators.

A herd of muskoxen lumber across the summer tundra near Arctic Watch Wilderness Lodge. Photo courtesy of Nansen Weber Photography

You might know these gentle giants as a resident of Greenland, but muskoxen graze the Canadian High Arctic in massive herds, as well. The last European herd in Sweden died out about 9,000 years ago, making this one of the animals that live in the Arctic and nowhere else on earth.

A behemoth with a strictly vegetarian diet, this beast sustains itself with the tundra’s bountiful salad of mosses, lichens, roots, flowers and grasses (the latter in the summer). If you do run across muskoxen, chances are that you’ll see them during their dramatic summer rutting season. You’re likely to observe bulls bellowing, lowering their heads and charging their rivals in their efforts to establish dominance and thereby claiming their own harem of females.

The rutting season is timed to occur just after the female muskox has given birth to a single calf, between April and June. The young are up on their feet within hours of birth, so should you happen upon a herd, sometimes numbering from 24 to 36 animals, don’t be surprised if they snort, stomp, and form a protective circle around their young! 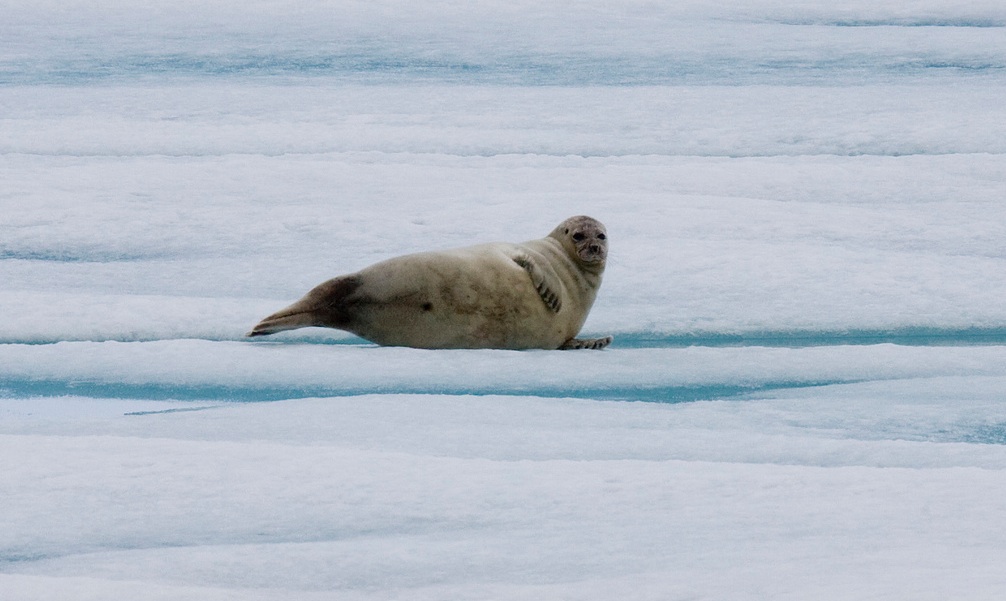 Ringed seal like the one pictured above are among the Arctic wildlife you might spot on an expedition to Arctic Watch Wilderness Lodge. Photo courtesy of Nansen Weber Photography

Named for its gray-white rings stylishly adorning its gray coat, the Arctic ringed seal is by far the most widespread Arctic marine mammal. Once the sea ice has yielded in late spring and early summer, ringed seals – including their individual broods of a single spring-born pup – may be seen along the edges of the shore ice or in open water.

Ringed seals favor Arctic cod, but are also fond of krill and shrimp. They are known to dive to depths of up to 90 meters in search of their favorite food, and can stay submerged for up to 45 minutes.

5. Polar Bear, a Fearsome Predator to All 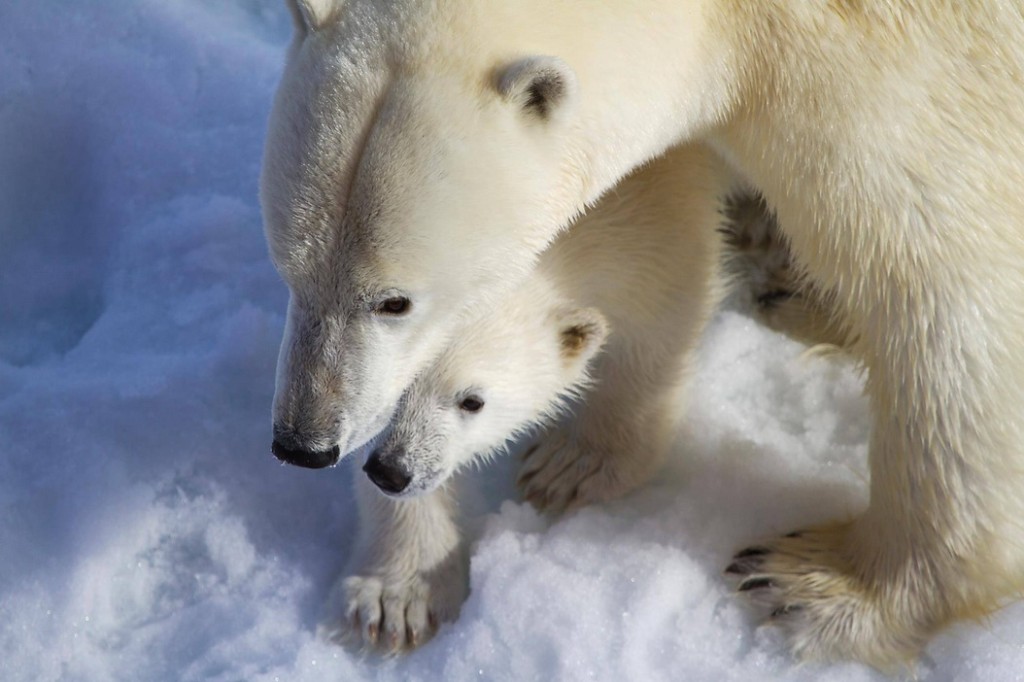 You definitely don't want to see one up close, but polar bear are among the arctic wildlife that roam the tundra near Arctic Watch Wilderness Lodge. Photo taken by a Quark passenger

Where there are seals, there are likely to be polar bears who relish the seals’ fat, a ready source of high-calorie food. You may spy a polar bear stalking the edges of an ice floe or breathing holes frequented by the seals.

The undisputed sovereign of the Arctic and the largest species of the world’s bears, a mature male polar bear can weigh in at 351 to 544 kilograms (775 to 1,200 pounds). Mature females, generally half that size, are still formidable, especially so when protecting their young. A female polar bear, with anywhere from one to three cubs tagging along, will emerge from her winter’s den in early spring (late March to early April). So come summer, and come some good fortune, you may realize the Arctic wildlife lover’s dream of watching this magnificent animal teaching her young how to hunt. They’re already skilled at play!

The tundra and waters surrounding Arctic Watch Wilderness Lodge are home to a number of other Arctic wildlife. In summer, the nearby Cunningham Inlet is teeming with thousands of beluga whales, making it a must-see on your expedition. Depending on the time of year, migratory patterns and weather conditions, you might also get lucky and spot caribou, snowy owls, or majestic peregrine falcons. 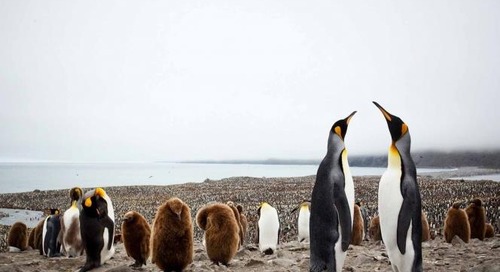 Protect Your Gear and Equipment in Extreme Cold

How to protect your camera, lenses, tripod and other gear from the extreme cold in the Polar Regions. 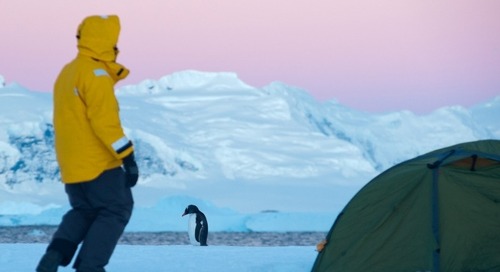 To the adventure-addict, there are few areas in the world as alluring as those locked in ice. Polar destina...