Having spent a day crossing Davis Strait from the foggy, ice-filled wonderland that was Greenland, it was with much anticipation that we approached the Canadian Arctic. Our first stop would be Monumental Island, an uninhabited island where we hoped to spot some Arctic wildlife. Almost magically, the sea stood perfectly still, flat and calm far into the open ocean towards Greenland. With bright sun gleaming through a hazy sky, it was a perfect day to be out on the water. 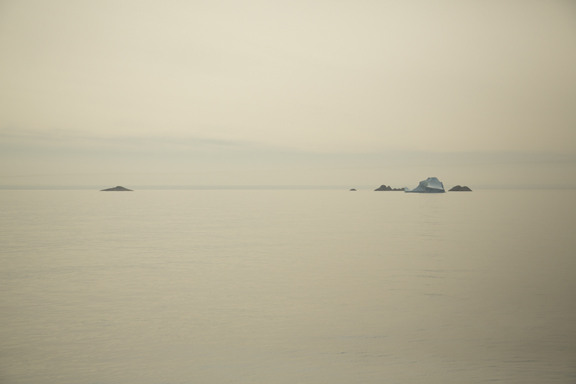 Thrilled with the warm weather, we set out for a zodiac cruise, admiring the beautiful frost erosion pattern in the rocky shoreline. A few icebergs floated nearby, reminding us that despite the streaks of green vegetation on the hillside, this area would be frozen for a large portion of the year. Binoculars out, we scanned the shore for signs of animal life.

A glimpse of creamy white atop a rocky point alerted our attention. As we drew closer, our hopes were confirmed – a female polar bear and her second-year cub lay resting atop the hill, awaiting the arrival of the sea ice in a few months’ time. For many in our group, this was a first sighting of a polar bear in the wild, and it was with great awe and wonder that we spent a while idling offshore, observing the animals interacting with each other. After a while, they wandered slowly down to an ice patch to cool off, where the cream tones of their fur stood out against the blue of the ice. We watched the way the cub followed its mother, imitating her every move. Even the kayakers in our group were able to paddle past for an unparalleled view of bears. 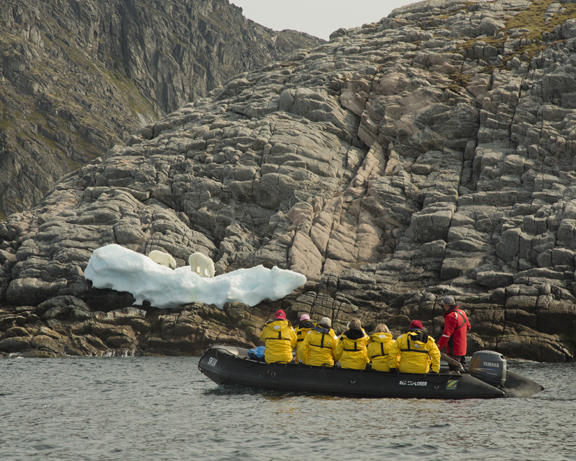 After some time, we decided to leave the bears in peace and circumnavigate the island. As we rounded the first point, a churning motion in the water’s surface caught my eye. A large pod of walrus – 50 or 60, we estimated – rose and fell with great agility in a concentrated group, the details of their whiskers and tusks clearly visible through a pair of binoculars. Although fascinated by their gracefulness in the water, we decided to give them space, as walrus in the water are unpredictable and wary of humans.

As we came around Monumental Island full circle, we stopped at an iceberg floating in the eerily glassy water. A brilliant blue vein ran through the ice like a ribbon, traversing both the angular faces of the berg and the smoother parts that had been eroded by the sea. At a certain angle, as the sun illuminated the vein, the berg appeared to be glowing from the inside. 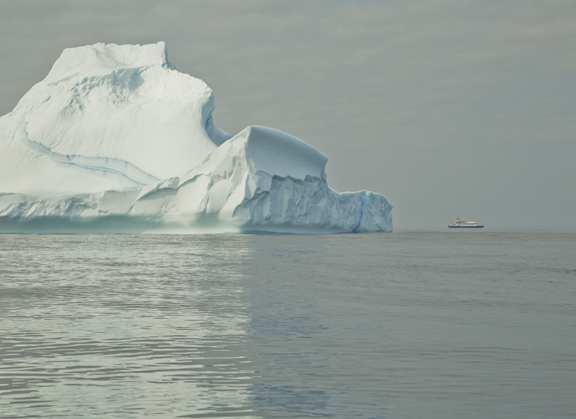 It was, all in all, a monumental day for everyone, and we left the island overjoyed with the weather and the day’s wildlife sightings. Not bad for a first day in Canada, eh? Back aboard the Sea Explorer, we sailed for Akpatok Island, where the adventure was sure to continue.

Visit Arctic Quest for more information about this fantastic voyage! 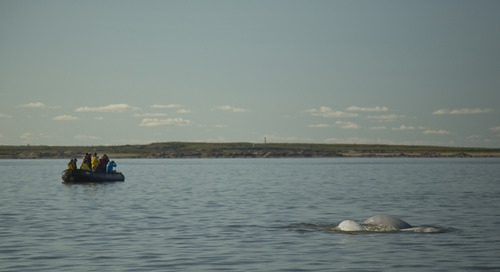 Written by Acacia Johnson On a beautifully warm day in Churchill, Manitoba, the Sea Explorer welcomed a new... 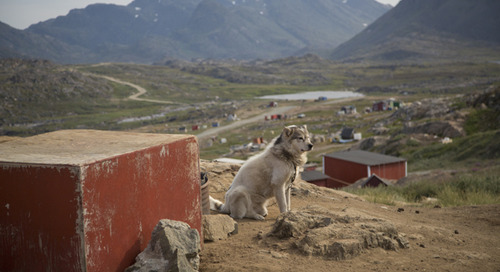 Written by Acacia Johnson Early morning on the Sea Explorer dawned calm and hazy, the low sun sparkling off...