100 Years Later with Shackleton and Scott

That’s how I met Jonathan Shackleton and Falcon Scott for the first time. I wasn’t expecting to meet them until we boarded the ship, but as it turned out I was standing next to them on a shuttle bus from the airport terminal to the plane headed to Ushuaia. It was Friday, February 8, 2013.

I’d been speaking with and emailing Jonathan and Falcon for months, organizing their time with Quark on the Ocean Diamond as our “Experts-in-Residence” for this voyage. We shook hands and Jonathan quickly gave me a double kiss on the cheeks and said, “Lovely to meet you.”

Immediately I could hear whispers on the shuttle bus of those who took notice and knew who these gentlemen were. Most people on the shuttle were more than likely headed to Antarctica. And these two great descendants of Antarctic explorers were on the shuttle bus with them! You could feel the excitement moving across the crowd. This set the tone for the voyage...

On the first night aboard the Ocean Diamond, the expedition staff welcomed Jonathan and Falcon and introduced them as part of the Experts-in-Residence program. Some of the passengers had booked their trip specifically because these two men were going to be in attendance, while some didn't know. Either way, the passengers were thrilled. Cameras were clicking, people were approaching them, and everyone tried to sit with them for at least one meal during our voyage.

On day 2 of the Drake Passage, Jonathan gave his first lecture on the history of his cousin, Sir Ernest Shackleton. Within the first 10 minutes of his presentation, Woody (our expedition leader extraordinaire) came on the public address system to announce our first iceberg sighting, “I’m terribly sorry to interrupt Jonathan Shackleton’s lecture, however there is an iceberg on the port side of the ship.” Everyone was obviously unable to sit still, however no one wanted to be the one to get up in the middle of his lecture. Thankfully Jonathan realized and offered to delay his presentation. When everyone returned to their seats, he re-started his presentation by saying, “The present is much more important than the past.” Obviously he understood how excited everyone was to take in everything onboard, on-land and at sea.

That afternoon we had our first landing in the South Shetland Islands. Jonathan, Falcon and I were on the first Zodiac together to land in the Aitcho Islands. As Jonathan and Falcon shook hands, the first time a ‘Shackleton’ and a ‘Scott’ were on the Antarctic Continent together in over 100 years, Falcon said with a sheepish grin, “Welcome to my Continent.”

The highlight of the voyage with Jonathan and Falcon, however, was our overnight camping experience on the Continent. How exciting to sleep on ice, in bivy sacs (or tents) with descendants of the great explorers. Before bed we were all gathered around Jonathan and Falcon as they recounted stories and read from their books. It was quite the Antarctic bedtime story.

When I first started working with both men, I would refer to them as “Shackleton and Scott.” Now they are, and will forever be, Jonathan and Falcon. Yes, they are indeed descendants of great Antarctic trailblazers, but they have also become more in my eyes. They are kind and sweet, polite and gentle, helpful and caring men with an incredible family history which they generously and proudly shared with the world. I, for one, feel lucky to have had such an enriching experience.

So at the end of our 11-day voyage, we parted ways just as we had met: with a kiss on both cheeks. And although I’m sad to no longer be breaking bread with Jonathan and Falcon, I do hold very fond memories of my time with them at the bottom of the world... And I’m not gonna to lie, it was kind of cool to know that I was part of the team that brought these two together.

By Karine Bengualid
Karine Bengualid is Quark Expeditions' Marketing Manager. A keen traveler, this was her first trip to Antarctica and her 6th continent. 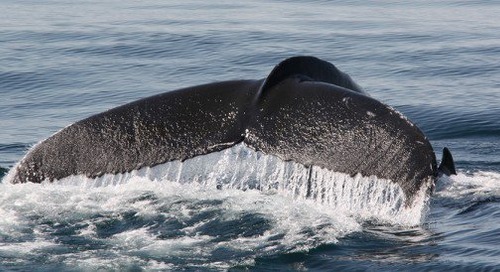 A breathtaking shot of a Humpback whale , waving to some Quark Expeditions passengers in Antarctica.